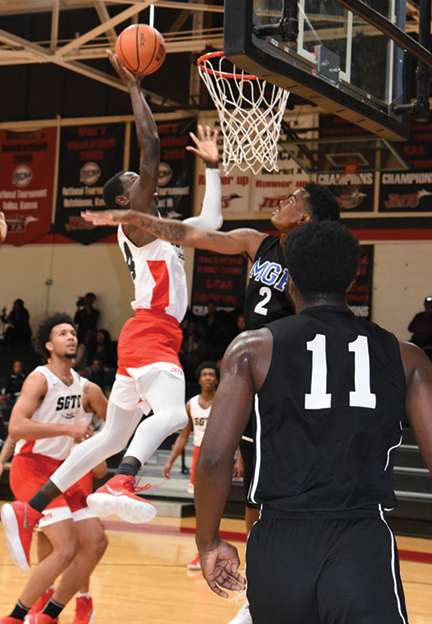 SUBMITTED BY SOUTH GEORGIA TECHNIUCAL COLLEGE: SGTC’s Marquel Wiggins, 34, goes up for a dunk in the match-up with Middle Georgia Prep.

The South Georgia Technical College (SGTC) Jets and Lady Jets both came away with wins in a pre-season double-header scrimmage at the Hangar in Americus on Oct 30. The Jets held off a last-minute attack to defeat Middle Georgia Prep, 82-78 in the opening game and then the Lady Jets closed out the night with a 71-57 victory over the Albany State Lady Rams.
“It was a good win,” said Jets head coach, Travis Garrett. “I definitely saw a lot of room for improvement but this was a good test. Middle Georgia Prep has a great team and they have had some success against some really good teams. We were pleased to get this win under our belts before we open up the regular season schedule this weekend.”
SGTC athletic director and Lady Jets head coach, James Frey, was also pleased to walk away with a victory against the Lady Rams in the scrimmage. “Our freshmen and sophomores were playing against juniors and seniors, but this was very good exposure for our Lady Jets. We made a lot of mistakes that we can’t in a real game situation but that is the reason we play these games,” said Frey. “We had too many fouls and too many turnovers.”
In the opening game, the Jets and Middle Georgia Prep swapped leads in the first half, but South Georgia Tech managed to pull ahead 43-34 by the halftime buzzer. SGTC stretched the lead to 78-66 with 3:22 left in the game.  The Jets were still up 80-70 with 1:17 showing on the clock, but a last-minute spurt from the visitors had the game at 78-80 with 4.4 seconds remaining. SGTC scored on a last-second basket to capture the 82-78 win.
The Jets were led in scoring by sophomore forward, Marquel Wiggins, from Macon County, Ga.  The 6’ 6” forward had a total of 23 points on the night. He was followed by another sophomore, Rico Simmons, a 5’ 9” point guard from Gordon, Ga., who added 14 points. Another returning Jet, Mike Boone, a sophomore guard from Charlotte, NC was the third leading scorer with nine points.
DeVante Forster, a sophomore forward from Stockbridge, Ga., added eight points and freshmen, Da’monte Greene and Dominique Walker, both tossed in seven points. Greene is a 5’9” guard from Savannah and Walker is a 6’ 7” forward from Brunswick. Sophomores, Dawan Bass and Emeshauan Offord, from Baltimore, MD, and Albany, Ga., came up with five points each. Sam Matice from Canada had two points and Adonis Greene from Stockbridge closed out the scoring with one point apiece.
After that narrow victory by the Jets, the Lady Jets took to the court. Albany State scored first but the Lady Jets came back and took the lead with a little over eight minutes left in the first quarter. Albany State then rallied and went up by four points. SGTC came back and built a 16- 12 lead at the end of the first half and held on to a 26- 23 lead at the end of the first half.
The two teams were tied at 43- 43 at the end of third quarter, but the Lady Jets outscored the Lady Rams, 28-14 to capture the 71-57 victory. 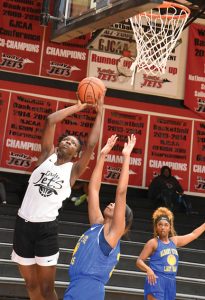 Returning sophomore Esther Adenike, a 6’2’ forward from Lagos, Nigeria was the leading scorer for the Lady Jets with 17 points. Adenike was followed by freshman guard Alyssa Nieves from Tampa, Fl., who added 16 points. Sophomore guard Dakata Toney from Detroit, Mi, and Ricka Jackson, a freshman forward from Ewa Beach, Hi., closed out the double-digit scoring for the Lady Jets with 13 and 11 points each.
Bigue Sarr, a freshman center from Kaolack, Senega, added seven points, returning sophomore Houlfat Mahouchiza from Nice, France, added four points. Sophomore center Sceret Ethridge from Argyle, Ga., had two points and freshman point guard Cedeja James from Teaneck, NJ, closed out the scoring with one point.
Both the Jets and the Lady Jets will open the season this weekend. The Lady Jets will host the Lady Jets Tip-Off Classic beginning on Nov. 4. They will take on Southern Union at 4:00 p.m. on Saturday and face Denmark on Sunday at 4 p.m.
The Jets will travel to the Roane State Classic on Nov. 3 to battle Cleveland State. The results of this contest were not available at press time.
They will face Roane State at 5:30 p.m. CST on Nov. 4.
The Lady Jets will travel to Albany Technical College on Nov. 8 for a 5:30 p.m. game and then host Atlanta Metro at home at 5:30 p.m. on Nov. 15 for another conference game.