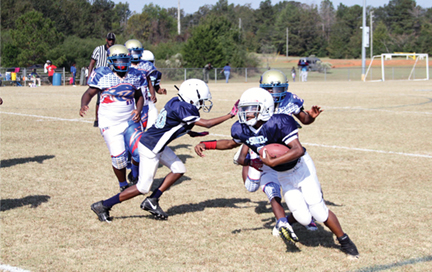 MICHAEL MURRAY I ATR: A player from the Sumter County All Stars 12-and-under team rushes down the field with members of the South Georgia Panthers in hot pursuit during the Miller Rush Bowl in Americus on Nov. 4.

AMERICUS – The Sumter County Parks and Recreation Department (SCPRD) held the organization’s second annual Miller Rush Bowl on Nov. 4 at the Highway 19 Sports Complex, just outside of Americus.
For the event, 15 teams descended on the complex to test their gridiron skills against their peers from neighboring counties.
Competing teams came from Houston, Sumter, Macon, and Thomas Counties in addition to a travel program dubbed the South Georgia Panthers.
The Thomas County Stars were the overall victors in both the 7-8-year-old division and the 9-10-year-old division. The Houston County Warriors took the top honors in the 11-12-year-old bracket.
Over 150 parents, spectators, and fans were in attendance. 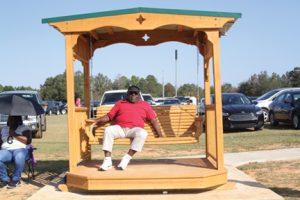 MICHAEL MURRAY I ATR:
Retired longtime SCPRD employee, Miller Rush, watches the action from his dedicted swing during the Miller Rush Bowl on Nov. 4 in Americus.

Miller Rush, the event’s namesake, was also in attendance to watch the action. From a covered swing on the north end of the fields that was recently constructed with him in mind, Rush spoke with the Times-Recorder about the tournament.
“It’s great, not only on my behalf, but it’s great for the kids,” he began. “That’s really what it’s all about… The kids… As long as we can keep these kids out here occupied and concentrating on the right things in life, then I pray to God that the Miller Rush Bowl will survive many, many more years.”
Rush, a longtime employee and devotee of the SCPRD, also stated that he wanted to give credit to one of the event’s principal organizers, SCPRD athletic director, Dwight Harris.
“I just have to take my hat off to the Sumter County Parks and Recreation Department; mostly Dwight Harris for his hard work and all that he does to make this event a success,” Rush told the Times-Recorder.
He went on to say that he would like to acknowledge everyone else that helped to create the successful competition. 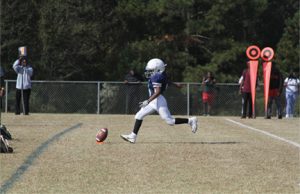 MICHAEL MURRAY I ATR:
The place kicker for the Sumter County All Stars 12-and-unnder team boots a PAT attempt during a contest against the South Georgia Panthers at the Miller Rush Bowl in Americus.

“All of the other teams, locally and from out of town… I appreciate them participating in it and taking advantage of it,” he said. “To all the teams, parents, and coaches, I want to pour out my heart in thanks for allowing the children to participate… We just want to thank everyone and say that we hope that everyone is safe and happy… Last year, it was good. This year, it’s even better. I pray that next year, it will be even better still.”
Rush added that his son, Travis Rush, had followed in his footsteps and was coaching the traveling teams… the South Georgia Panthers…  that were participating in the bowl.
Rush also said that he was just as excited to be there at the event as many of the kids who were playing.
“Everybody here is a winner,” he concluded. “The Miller Rush Bowl is for winners. Everyone that participates here is a winner. It’s not the score that counts. It’s the heart. If you have enough heart to put on your uniform and come out here and play, you’re a winner.”