Wildcats blaze past Turner 14-6 in round one of playoffs 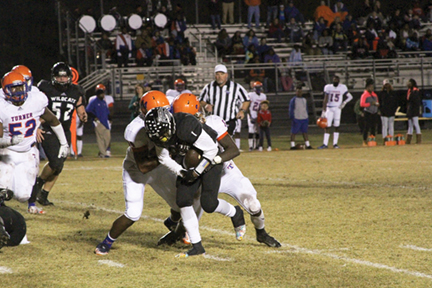 MICHAEL MURRAY I ATR: Schley’s James Baker attempts to break away from a pair of Turner County defenders during the first half of the Wildcats’ Nov. 10 playoff tilt against the Rebels in Ellaville.

ELLAVILLE – The Schley County Wildcats have done it again, hosting the Turner County Rebels for the first round of the state Class A playoffs and delivering a 14-6 defeat to the guests on Nov. 10 in Ellaville.
With the win, the Wildcats improved their overall record to 8-3 on the 2017 season and earned the right to battle the Mitchell County Eagles in Camilla for the second round of the playoffs. The ‘Cats’ next tilt is scheduled for Nov. 17.
The Rebels received the opening kickoff to begin the Nov. 10 contest that would become a defensive battle that spanned the duration of the first half.
After holding the visitors to only seven plays thanks, in  part, to the defensive efforts of Schley’s James Baker, Zykievious Walker, Alec Harris, and Ja’myron Clayton, the Wildcats took possession of the ball and took off on a 13-play drive.
The Wildcats’ return drive was highlighted by a series of runs by Calvin Sims, Baker, and Harris, as well as a long reception by Walker.
A reverse to Ja’Myron Clayton also helped to keep the Wildcat drive alive and the home fans cheering.
The ‘Cats pushed the ball all the way to the edge of the Rebel red zone, but the determined visitors would not allow the hosts to progress any further on that series.
After relinquishing the ball, the Schley squad held the Rebels to only four downs, retaking possession at their opponents’ 32.
Aided by a personal foul penalty in favor of the Wildcats, the hosts were able to utilize a series of rushes by Baker to bring the ball within striking distance.
From the two-yard line, Sims managed to break through the Rebel defenses and score, putting the first points of the game on the board for the Wildcats. Schley place kicker, William Blackwell, then dutifully executed a successful PAT to put the Wildcats ahead 7-0 in the final moments of the initial quarter.
Turner County’s answering campaign ate up nearly half of the second quarter, as the Rebels inched forward over 14 plays.
Schley’s Clayton, Derric Tatum, and Peyton Register each got in on the defensive action during this drive, contributing tackles to stall the visitors’ progress.
The Rebel drive ended, however, at the Wildcats’ 25-yard line and the ‘Cats retook control of the ball.
More carries by Sims, Baker, and Sampson helped the Schley squad land the ball deep in their opponents’ red zone, though a fearsome goal-line stand from the visitors eventually left the Wildcats staring down fourth and goal from the eight-yard line.
From there, head coach, Darren Alford, called upon Blackwell again to attempt a field goal. The boot sailed wide right, leaving the score stagnant.
Another exciting moment near the end of the half saw Register jump onto a fumble with 15 seconds remaining before halftime.
On the final play of the initial half, Wildcat quarterback, Garrett Peavy, launched a scrambling pass that Clayton nearly pulled in as the clock struck zero. The pass was just out of reach, however, and the Wildcats took their 7-0 lead into the locker room at the end of the half.
When play resumed, the Wildcats got off to a rough start as the Rebels recovered a fumble early in the third and took off on a nine-play drive that landed the visitors in the end zone. Wade Rodgers, Zamon Ross, and Wayde Montgomery each contributed tackles to slow the Rebels during their scoring drive, with Rodgers recording his first sack of the game.
The Rebels’ PAT attempt fell short, leaving the Wildcats ahead 7-6, where the score remained until the final frame.
After the teams exchanged possession twice more, the Schley squad added an insurance touchdown with 5:22 remaining in the game. The drive spanned 68 yards and 14 plays as Sims, Baker, and Sampson steadily pressed the ball forward. Finally, on fourth and goal from the one-yard line, Sampson was able to break the plane and put the game away.
Blackwell, once again, split the uprights on the PAT to bring the score to 14-6, where it would remain until the final buzzer.
Highlights of the last five minutes of play included a sack shared by Rodgers and Montgomery that set the visitors back 25 yards and forced a punt, giving the Wildcats one final chance to score.
Time wasn’t on the Wildcats’ side, however, and the game was concluded before any more points could be added to their tally.
The ‘Cats will put their record on the line once more in Camilla on Nov. 17, battling the 9-1 Mitchell County Eagles for the second round of the Class A playoffs.