ASHS, Schley headed into round two of GHSA gridiron playoffs 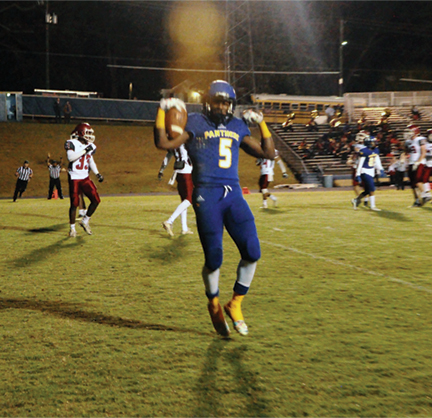 NICHOLE BUCHANAN I ATR: ASHS’ Kobe Lewis hams it up for the ATR’s camera after scoring one of two touchdowns that he logged in the first qurter of the Panthers’ Nov. 10 playoff match-up against the Howard Huskies.

Both the Americus-Sumter High School (ASHS) Panthers and the Schley County Wildcats won significant victories in their respective Georgia High School Association (GHSA) state playoff match-ups at home on Nov. 10.
Each team put on a stellar performance in their tilt as the Panthers defeated the Howard High School Huskies 27-14 and the Wildcats took down the Turner County Rebels 14-6 to earn the right to advance in the playoffs.
With their victory, the Panthers progress in the playoffs to take on the Thomson Bulldogs at home on Nov 17; a rivalry that has been sustained for over 50 years. The Wildcats will be hitting the road for Camilla to put their skills to the test against the Mitchell County Eagles for round two of the playoffs.
The Panthers put on a great show on the gridiron in their tilt against the Huskies.
ASHS quarterback, Kierston Harvey, completed 11 passes for a total of 225 yards through the air to contribute to the Panther win.
On the receiving end of the ball, ASHS’ Braelin Williams pulled in two passes to contribute 99 yards to the Panther cause, followed by Kobe Lewis, who brought down a pair of his own for 85 yards. Sage Finch caught three passes for the Panthers to add another 28 yards.
On the ground, Lewis set the bar high for the Panthers, rushing 22 times for 148 yards. AJ Payne tacked on another 91 yards for the Panthers on 11 totes while Williams covered another 33 yards on a pair of handoffs.
Finch, Harvey, Mikal Douglas, and Montrellis Wilson each added yardage on the ground for the Panthers as well.
In total, the Panthers amassed 514 all-purpose yards in the game. 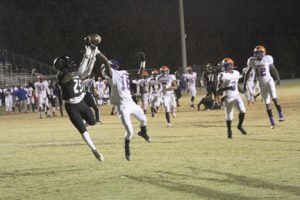 MICHAEL MURRAY I ATR:
Schley County’s Ja’Myron CLayton scrambles to pull down a pass during the first half of the Wildcats’ Nov. 10 playoff tilt against the Turner County Rebels.

Meanwhile, in Ellaville, the Wildcats were putting on an exciting display of their own.
As the Wildcats were hustling for their eight-point win over the Rebels, several players were working diligently to secure the “W”.
Schley quarterback, Garrett Peavy, completed a pair of passes in the tilt with Zykievious Walker on the receiving end of both.
Calvin Sims was, once again, the main yardage-earner for the ‘Cats with 132 yards covered on 27 carries. James Baker added another 42 yards on the ground on 10 carries.
In total, the Wildcats covered 271 yards in the match.
On the other side of the ball, 13 different Wildcat team members contributed tackles to the Schley win. Walker paved the way for his teammates with five solo tackles and four assists. Ja’Myron Clayton soloed four tackles and assisted on one while Zamon Ross and Trent Bivins each took down three opponents on their own.
Baker, Jakim Hart, Dartavious Napper, Derric Tatum, Tra Sampson, Wade Rodgers, Wayde Montgomery, Alec Harris, and Peyton Register each contributed on tackles as well.
Bivins, Rodgers, Montgomery, and Register each recorded sacks in the match while Ross and Register both caused fumbles.
In upcoming action, both the Panthers and the Wildcats will face some of their toughest opponents so far this season as the competition continues to increase in ferocity.
The rivalry between the Panthers and the Thomson Bulldogs stretches back all the way to the 1965 season, in which the Panthers bested the Thomson squad 20-14 in the semifinal round of the state playoffs. The Panthers went on to win the state championship the following week.
More recently, the Panthers tangled with the Bulldogs in the first round of the 2016 playoffs. The Bulldogs won last year’s tilt, leaving the Panthers hungry for a rematch. The ASHS squad will get their wish on Friday.
The Bulldogs will bring a 9-1 record to Americus to face the Panthers, having logged their only loss so far this season to Burke County… and the Panthers will be ready to defend their 9-2 record.
Thomson has several offensive weapons in their bag, including running back, Tyrek Braswell, who reportedly rushed for 240 yards in the Bulldogs’ regular-season closer against the Academy of Richmond County. Braswell has accumulated over 1,000 rushing yards this season and it will be up to the Panther defense to keep him from tacking on more on Friday.
Running back, Bubba Murray, has also been a consistent yard-earner for the Bulldogs this season, with 15 touchdowns scored so far. Quarterback, Mills Ridings, has repeatedly shown an ability to perform under pressure as well.
Luckily for ASHS fans, the Panthers sport an equally talented roster that ought to be able to run neck and neck with Thomson’s offensive attack and put points on the board in the high-pressure match-up.
Regardless of the outcome, this is sure to be an exciting game for everyone involved.
As the 8-3 Wildcats head to Camilla, they will have to deal with the 9-1 Eagles, who have proven to be formidable foes as well.
Mitchell’ sophomore quarterback, James Thomas, has reportedly passed for over 1,000 yards and 10 touchdowns so far this season. Schley will also have to contend with Mitchell’s Freddie Chevers, who reportedly recorded 10 tackles and three interceptions in the Eagles’ season-finale win over Pelham.
The Eagles also received a bye week for the first round of the playoffs, which may or may not work in the Wildcats’ favor.
The Schley squad has several weapons at their disposal as well, and they’ll likely need every one of them in order to win what is sure to be a fierce competition.

Wildcats blaze past Turner 14-6 in round one of…