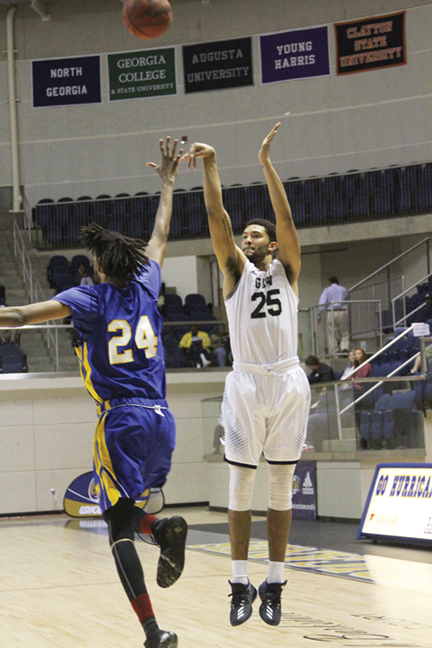 MICHAELMURRAY I ATR: GSW’s John Mason tosses up a trey over a Wildcat defender during the Hurricanes’ Nov. 21 home tilt against Fort Valley State.

AMERICUS – Both the Georgia Southwestern State University (GSW) Hurricanes and Lady Hurricanes improved their records on the young 2017 season, facing Fort Valley State University (FVSU) on Nov. 18 and 21 at the Storm Dome in Americus.
The Hurricanes utilized a balanced attack on offense with four players scoring in double figures to defeat the Wildcats, 65-52 in the Nov. 21 tilt. The Hurricanes improved their record to 2-0 while FVSU fell to 2-3.
The Lady Hurricanes got back on track with a 78-48 victory over FVSU in the PBC/SIAC Challenge finale in front of 253 fans on Nov. 18.
In GSW men’s action, Back-to-back buckets from Hasaan Buggs followed by five straight points from R.J. Sessions helped the Hurricanes jump out to a 9-2 lead in the opening four minutes. The Wildcats refused to let GSW stretch its advantage beyond seven points, but the Hurricanes managed to match that number four more times during the course of the opening session.
Neither side could score during a three-minute stretch that ended with a Buggs free throw at the 7:54 mark. John Mason followed with a three-pointer to put the Hurricanes on top, 24-19, and the GSW defense kept Fort Valley State off the board for another two minutes. GSW led 31-27 at the break.
FVSU scored the first basket of the second half to pull within two points, but Andre Statam answered with a three-pointer and the Hurricanes never looked back. A 10-0 run took GSW to the 13:12 mark ahead by 14 points, 46-32. The Hurricanes largest lead of the night came off a three-pointer by Sessions with 4:08 to play that made the score 61-46.
GSW drained six of 10 attempts from long range in the second half to finish the game at 40.9 percent (nine of 22). The Hurricanes dished out six more assists (15-9) and forced five more turnovers (12-7), while holding the Wildcats to 15.4 percent shooting from beyond the arc over 26 attempts. FVSU entered the game having won its last two contests by an average margin of 22.5 points.
Buggs set the pace for the Hurricanes, sinking five of 10 shots to finish with 11 points and lead the team in rebounds (7) and assists (4). Statam added 12 points and six rebounds. Sessions scored 12 points and Devin Watson chipped in 11. Mason and Dajion Macklien both connected on two of three from long range to help the Hurricanes off the bench.
Three days earlier, the Lady Hurricanes put on quite a show of their own against the Lady Wildcats.
Gabby Figgers led all scorers with a game-high 18 points, shooting six-of-12 from beyond the arc to record her first double-figure scoring outing of the season. Amanda Melosky fell just a rebound shy of recording the first double-double of the season for the Lady Canes, finishing with 12 points and nine boards. 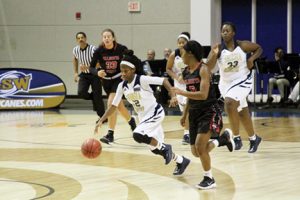 MICHAEL MURRAY I ATR:
GSW’s Gabby Figgers makes a break for the bucket during the Lady Hurricanes’ home opener against Valdosta State on Nov. 14 in Americus.

GSW had a season-high four players score in double-figures, as Shanya Jones (12 points) and Lauren Duncan (10 points) joined Figgers and Melosky. Nola Carter recorded a double-double to lead FVSU with 18 points and 12 rebounds.
GSW jumped on the Lady Wildcats early and didn’t look back, putting up 22 points in the first quarter to take a nine-point lead. Figgers knocked down three of her six three-pointers in that opening 10 minutes to help build the early advantage for the Lady Canes, who held FVSU to 33 percent shooting while forcing five turnovers.
The GSW defense turned up the pressure even higher on the Lady Wildcats in the second quarter, forcing 11 turnovers while allowing just two made shots from the floor. The Lady Canes used a 13-2 run to turn a close game into a 14-point lead before taking a 38-25 lead into the locker room at the half.
FVSU was able to find its offense in the third quarter, shooting 46.7 percent from the floor on the way to scoring 18 points, led by Alicia Franklin with eight of her 12. GSW put up 22 points of their own at the other end as seven different players scored, helped out by a 12-7 rebounding advantage including six offensive boards that led to five second-chance points.
The Lady Canes’ defense swarmed FVSU in the final 10 minutes, allowing just five points in the fourth quarter on one made basket from the field. GSW was seven-of-seven from the free throw line in the fourth to finish 75 percent from the stripe on the night.
The even distribution of scoring was a bright spot for GSW with the season-high four players scoring in double-figures. Gabby Figgers has now connected on 11 three-pointers in three games (11-of-25). Amanda Melosky has 16 rebounds on the season after grabbing nine boards.
Both the Hurricanes and Lady ‘Canes will be taking some time off before returning to the court on Dec. 2. The teams will be taking on USC Aiken on Dec. 2 to open Peach Belt Conference (PBC) competition at the Storm Dome.