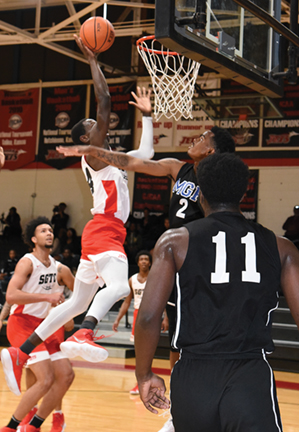 OCALA, Fla. – The South Georgia Technical College (SGTC) Jets upset Central Florida in their own Central Florida Thanksgiving Classic basketball tournament recently in a narrow 84-82 decision over the unbeaten Patriots. The Jets dropped a 92-80 decision to St. Petersburg College in the opening match-up to walk away 1-1 in the tournament.
The win over Central Florida was especially sweet for Jets head coach, Travis Garrett, who played there during his college career. “I was very proud of my team,” said Garrett. “We got down early and trailed 42-35 at the half, but we came out strong in the second half to clinch the 84-82 victory.” Central Florida was 7-0 prior to the upset by the 3-4 Jets.
The Jets were able to overcome that seven-point half-time deficit and pull ahead by three with one minute remaining in the game. The two teams battled during the last sixty seconds but a free throw by SGTC guard, Mike Boone, at the end clinched the victory for SGTC.
Sophomore guard, Rico Simmons, led the Jets in scoring with 17 points, six assists and six rebounds.  Sophomore forward, DeVante Foster, and sophomore guard, Mike Boone, were close behind with 15 points each. Foster contributed seven rebounds and one assist while Boone had four rebounds and two assists.
Sophomores, Dawan Bass and Marquel Wiggins, closed out the double digit scoring for the Jets with 13 points each. Bass brought down five rebounds and Wiggins contributed seven. Sophomore, Emshuan Offord, came off the bench to add nine points for the Jets and freshman Adonis Green closed out the scoring with two points in that game.
The Jets also played a good game against St. Petersburg in the first match-up of the tournament but fell short in the 92-80 decision. Wiggins led the Jets in scoring in that game with 30 points and 18 rebounds. Simmons was close behind with 21 points. Simmons also added four rebounds and four assists.  The only other Jet in double digits was Bass, who He had 10 points, seven rebounds, and three assists.
Rounding out the scoring for the Jets was Boone, with eight points. Adonis Green, Malik Wilson and Monte Greene all had three points and Foster closed out the scoring with one.
The Jets will travel to Miami, Fla. on Dec. 1-2 for the Miami Dade Classic Tournament. They will battle Miami Dade on Dec. 1 before facing Palm Beach on Dec. 2.
They will return home on Dec. 6 for a double-header with the Lady Jets. The Jets will face Tallahassee Community College at 7:30 p.m. The Lady Jets host Andrew at 5:30 p.m.