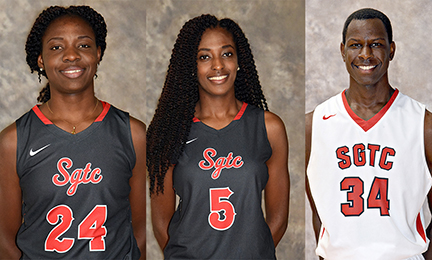 AMERICUS — The South Georgia Technical College Lady Jets moved up five spots in the National Junior College Athletic Association Division I women’s basketball rankings this week following an impressive 84 – 46 victory over Georgia Highlands. The Lady Jets were ranked 13th in the NJCAA pre-season poll. The Lady Jets are currently 10 -1 overall and in first place in the Georgia Collegiate Athletic Association Conference with a 4 – 0 record.
“This is a tremendous honor, but we know that we have to keep playing hard to remain in the rankings,” said South Georgia Technical College Athletic Director and Lady Jets head coach James Frey. “Our goal is to return to the NJCAA National Championship again this year and do even better than we did last year. We finished in the top 16 teams in the NJCAA National Tournament last year and we have the potential to reach that level again or do even better, but we have to remain focused and play hard.”
Gulf Coast State is currently ranked 1st in the NJCAA Dec. 5 poll with an 8 – 0 record.  They are followed by Trinity Valley, 12 – 0; Shelton State, 10 – 0; New Mexico, 13 – 0; and Tallahassee, 9 – 0.  Northwest Florida State is ranked 6th with a 10 – 0 record and then Salt Lake is seeded seventh above South Georgia Tech with a 9 – 2 record.
All of the top 10 teams in the nation are sporting an unbeaten record except for Salt Lake, South Georgia Tech and Jones County, Miss. South Georgia Technical College is the only Georgia team included in the NJCAA Top 25 standings. The Lady Jets received 144 points to move up five places in the rankings. Gulf Coast State is first with 200 points.
In addition to the national team ranking, two of the Lady Jets are included in the individual rankings nationally. Sophomore Esther Adenike, 6’ 2” forward from Nigeria, and Houlfat Mahouchiza, a 6’ 1” forward from France, were both included in the individual rankings nationally.
Adenike is currently listed as 9th in the nation in total rebounds this season with 123. She is also listed as 12th in the nation in total rebounds per game with an average of 11.2 and 31st in offensive rebounds per game with an average of 4.3. Her teammate, Houlfat Mahouchiza is currently ranked 17th in the nation in blocked shots per game. She is averaging blocking 2.3 shots each outing. She also broke into the Top 50 in field goal percentage shooting. Mahouchiza is making 56 percent of her shots which has her in 46th place in the nation. She also joined Adenike in the top 50 in total rebounds this season. Mahouchiza has a total of 91 rebounds in 11 games which put her at 48th in the nation.
The SGTC Jets had one player included in the NJCAA individual rankings. Sophomore Marquel Wiggins of Oglethorpe is currently ranked 13th in the nation in offensive rebounds per game. The 6’ 6” forward is averaging 4.3 offensive rebounds per game. He has played and started in all nine games for the Jets this season. He is also averaging 4.6 defensive rebounds each outing to a total of 8.9 per game.