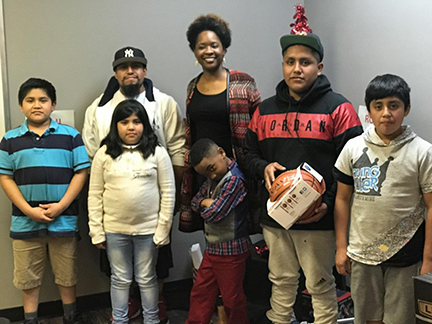 Ayden Mercer and his mother Latoya Mercer, shown in center, are shown with some of the family members they and others sponsored for Christmas.

AMERICUS — As recent movies have suggested, superheroes come in all shapes and sizes. Superheroes are everywhere, from the brave men and women in the police and fire departments to the polite young man who holds a door open for an elderly woman. Americus has an especially giving superhero. Ayden Battle, a six-year-old local with a big heart, has been helping others in the community since October.
Ayden loves lemonade, and like any other child his age, he wanted to open a lemonade stand. With his mother’s help, Ayden got his wish. The lemonade stand soon became very successful. Latoya Mercer, Ayden’s mother, realized that the stand could give back to the community. Then, in October, Ayden and his mother opened the stand to raise money for Breast Cancer Awareness. They were able to raise and donate $600 to the Oncology Clinic at Phoebe Sumter Medical Center. In November, he and his family collected and donated canned goods for Harvest of Hope Food Pantry in Americus. 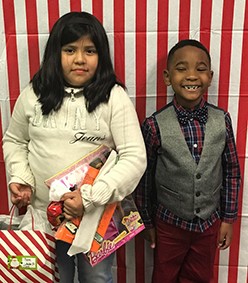 Ayden is shown with one of the people he helped to have a great Christmas.

his month, on Dec. 16, Ayden and his mother held an event called “Christmas with Ayden,” with the inspiration behind this being helping children in need fulfill their Christmas lists. Latoya contacted different foundations and agencies, such as CASA and DFACS to find families in need that could be sponsored. While the original goal was to sponsor 10 children, a family with seven children was found, so Ayden and his mother decided on them. Different people and families sponsored each child. The event itself was a big, family-style Christmas party with food, a DJ, dancing, and a Christmas tree. Some of the presents given to the children were a WWE Wrestlers set, a basketball goal, and a tablet. Ayden’s favorite part of “Christmas with Ayden” was the dancing, he said.
Ayden’s projects will not stop here. In January, he and his mother plan to hold a school supplies drive, because many students need school supplies halfway through the school year. The lemonade stand will also continue to sell — mostly in the summer months — open every first and third Saturdays of the month at 221 N. Lee St. in Mercer’s Barber and Beauty. Ayden’s Facebook page, Ayden J’s Juice, also sells his lemonade by the gallon. Next fall, along with the lemonade stand, Ayden and his mother hope to open a

Ayden’s smile says it all: it really is better to give than to receive.

produce market, with all the proceeds going to charity.
Why does Ayden do these projects? The answer is simple: he likes to see the people he helps smile. Recently, Ayden was honored by the Americus city council for the work he has done for Americus. Like any other six-year-old, Ayden loves superheroes. Because of the good he has done for his community, he has become one.