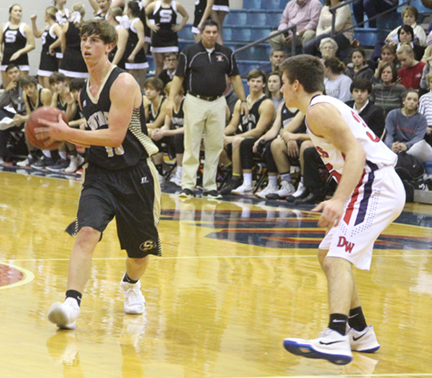 Southland's Alex Roach with the ball against a DW defender

ALBANY – One could tell Tuesday night that Southland Senior Guard Siage Batten loves to practice free-throw shooting and is not afraid of pressure. Batten made 11-14 free throws in the fourth quarter to help the Raiders win a tough 49-41 road victory at Deerfield-Windsor.

“We played good as a team. It was a good team win”, Batten said. “We’re looking to do it again on Friday.”

For Batten, that fourth-quarter performance at the foul line was the result of lots of practice. “I shoot a 100 free throws a day”, Batten said.

The Raiders (14-2) are off to their best start in 35 years for the Southland Boys Basketball Program.

In Tuesday night’s win over the Knights, it wasn’t just Batten’s outstanding free-throw shooting that won the day for the Raiders. Pounding the glass played a big part in it as well. “The main key was blocking them out…keeping them off the offensive boards”, Southland Head Coach Rundy Foster said. “If we could limit them to one shot a possession, I thought we had a chance and I thought we did a pretty adequate job keeping them off the boards.”

That they did, as Southland pulled down 14 rebounds in the first half.

Batten led the Raiders with 23 points on the night and went 12-19 from the foul line for the game. Lest one forget Batten’s surrounding cast, Alex Roach was in double figures as well, scoring 10 points for the game. Harrison Bell chipped in 8 points in the winning cause. Batten, Roach and Bell are all seniors, and their senior leadership showed up huge in this game.

The Raiders set the tone quickly by jumping out to a 7-2 lead to start the game. It was a key start for the Raiders, as they would never relinquish the lead. As the first half went on, they increased their lead to as much as 10 over the Knights. Deerfield-Windsor was able to cut into the lead slightly, but the Raiders still enjoyed a 21-14 lead at halftime.

The intensity was turned up a notch in the fourth quarter as Southland’s Parker Weldon was tagged with a technical foul. Ethan Merritt made one of two technical foul shots for the Knights. Deerfield-Windsor, however, was not able to cut into Southland’s lead. Then with 4:45 to go, there was a sequence in which each team blocked a shot, electrifying the crowd. At this point, the Raiders had a 39-29 lead until Batten was fouled shooting. Batten made both free throws, giving the Raiders a 12-point lead. Deerfield-Windsor struggled to score down the stretch in the fourth quarter, missing three-pointers and easy put-backs. They weren’t able to cut into the Raiders’ double-digit lead until the 2:28 mark when Daniel Ramsey scored, cutting Southland’s lead to 43-34.

There was another recent game in which the Raiders showed their grit and toughness on their way to a road win. Last Friday, Southland went into Chula, GA and defeated Tiftarea Academy in a 58-56 overtime win. In that game, Roach and Batten were brilliant: scoring 25 points each. Parker Weldon did his job on the glass in that game, pulling down six rebounds. In addition to Roach’s 25 points, the senior excelled on the defensive end, creating six steals.

For Deerfield-Windsor, they were led in scoring by Daniel Ramsey with 16 points and Nick Dixon scored nine points in the losing cause. With the win, Southland is now 2-0 in region play. They will go for their 15th win of the season when they host Valwood Friday night at 8 p.m.