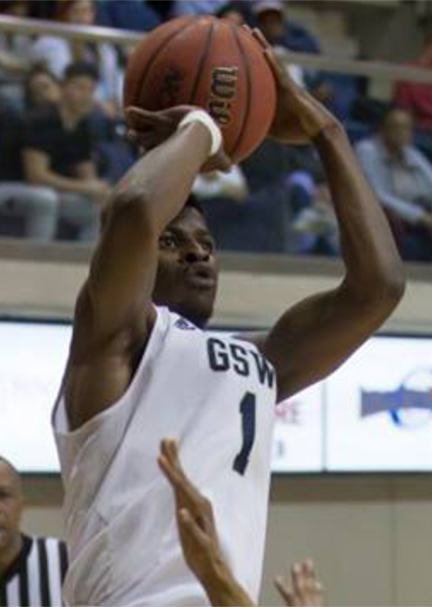 AMERICUS – R.J. Sessions scored 28 points to lead Georgia Southwestern State University to an 81-47 win over the University of North Georgia on Saturday, January 27.

It was a much-needed victory for the Hurricanes as they came into Saturday’s home game, having lost four straight.

With the win, the Hurricanes improve to 10-7 overall and 6-7 in the Peach Belt Conference.

GSW shot 52.5 percent from the field, including shooting 11-of-23 from beyond the arc. In addition to Sessions’ heroics, Dajion Macklien, starting his second game of the season, scored 17 points, grabbed four rebounds and dished out two assists.

Tyler Dominy led UNG with 10 points on the night. The Nighthawks fall to 8-10 overall and 6-6 in the PBC.

The Hurricanes went on an 8-0 run to start the game before UNG got their first basket on a layup by Shaquan Cantrell. The run increased to 15-2 after a three-pointer from John Mason, followed by a steal and fast-break layup by Sessions.

The Nighthawks got back in it with a 9-2 run of their own to cut the GSW lead to seven. However, that was as close as UNG would get for the rest of the night. The Hurricanes scored eight points in the final 1:33 of the first half to take a 37-24 halftime lead.

Sessions scored 16 points in the first half, including shooting 7-of-11 from the field. Macklien scored eight first-half points on 4-of-6 shooting.

The Hurricanes held the Nighthawks to 34.6 percent from the field on 9-of-26 shooting. They also forced UNG into committing seven turnovers in the first half.

The Hurricanes stormed out of the gate in the second half, scoring the first 11 points of the half and opening up a 24-point lead. After one made free throw by UNG, the Hurricanes made three straight from beyond the arc, two by Sessions and one by Macklien to increase the lead to 57-27 with 14:47 remaining.

Redshirt sophomore Colt Yawn started his first game of the season and made the most of the opportunity. Yawn hit a three-pointer in each half and scored nine points. Yawn also grabbed four rebounds, tallied an assist and got a steal in 25 minutes of playing time.

GSW held the Nighthawks to just 31.1 percent shooting for the game. UNG struggled from the foul line, hitting only 6-of-13 free throws.

The GSW defense forced the Nighthawks into committing 16 turnovers and scored 20 points off those turnovers.

Dajion Macklien has been getting more playing time due to injuries and has made the most of it. He had his best shooting game of the season on Saturday, hitting 8-of-11 shots from the field. Macklien has also contributed in dishing out assists and grabbing rebounds as well.

The Hurricanes will try to stay in the win column as they travel to Milledgeville, GA for a game against Georgia College. Tip-off is scheduled for 7:30 p.m. Wednesday night, January 31.