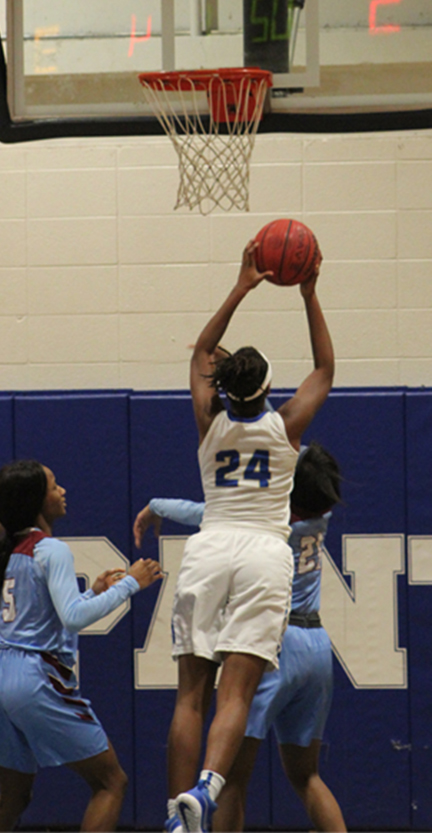 Americus-Sumter's Brianna Pope goes up for a shot against Carver. Pope scored 12 points in the win over Columbus.

This is the third-straight win for Americus-Sumter, after losing four-straight games.

Americus-Sumter had to deal with the Blue Devils’ “twin towers” on the inside: 6-foot-2 freshman forward Enyshuan Jones and the 6-foot-1 Howard.

“Ford and Pope played their twin towers well”, ASH Head Coach Sherri Harris said. “We had three players in double-figures. We played well in our half-court offense once they made their run in the third quarter.”

Americus-Sumter led at the half 25-15. Long and Ford led the first-half offensive attack as they scored a combined 18 first-half points.  However, the Lady Blue Devils outscored ASH 17-7 in the third quarter. They were led by Williams, who scored nine of her game-high 13 points in the third quarter. All nine were on three-pointers. The teams were tied at 32-32 with one more quarter to play.

The Lady Panthers are currently in third place in the region behind Westover and Carver.