ELLAVILLE – In spite of losing a lot of talent from last year’s state championship team, the 2018 Schley County Wildcat Baseball Team is poised and ready for another run to a GHSA Class-A Public School State Title.

As he did a year ago, Schley County Head Coach Chuck Cheek has put together another tough schedule to get his team ready for the play-offs. “Being that we lost a lot of good players from last year’s team, I thought about making this year’s schedule less difficult, but I don’t believe in doing that”, Coach Cheek said.

In addition to their region schedule, the Wildcats have games against GHSA Class AAAAAA power Lee County, GISA perennial power Deerfield-Windsor, and a game against Johns Creek at Cool Ray Field in Lawrenceville, GA.

As far as pitching is concerned, Cheek is still looking to see who the number one starter will be. “That’s kind of up for grabs this year”, Cheek said. “We’ve got several guys that we’re counting on.”  Among those being counted on to deliver in 2018 are senior Chance Hollomon and juniors Lorne Barineau, Dylan Windham and Ashton Goodin. “Ashton is still playing basketball. We don’t really have him out there yet”, Coach Cheek said. “It’s going to take him a little bit of time to get his arm back in shape and to get him back in the flow.”

This year’s pitching staff will have big shoes to fill, as former number one starter Chase Patrick and last year’s Class A State Player of the Year Will Barry have both graduated. In 2017, Patrick had a 1.22 ERA with a record of 7-0 with one save. He had 93 strikeouts in 63 innings. Barry had a 0.583 ERA in 38 innings pitched. He went 8-0 with 50 strikeouts.

In addition to the returning upper classmen, Coach Cheek is expecting much from some younger players as well, including sophomore Garrett Peavy. “Garrett is a sophomore for us. He has a chance to be one of our top starters”, Coach Cheek said. Cheek went on to say that he expects Sophomore Trent Bivins to be pretty good as well.

Being that a lot of the top-notch talent from last year’s team has graduated, the returning players, including freshmen, have been battling for various positions. “We have a lot of positions open”, Cheek said. “Dylan Taylor is a freshman we’re expecting big things from. He’s also still playing basketball, so we haven’t had him out at practice yet. It’s going to take him a little bit of time to get acclimated as well.”

According to Cheek, both Peavy and Bivins played minor, but important roles as freshmen on last year’s state championship team. This year, he’s expecting more from them. “They were courtesy runners. They ran bases…things like that”, Cheek said. “This year, we’re counting on them to step into the lineup and be starters for us, to drive runs in and make plays defensively, and to pitch for us. Those two, in particular, really have to have a big year for us to be successful.” 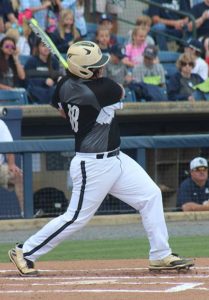 According to Cheek, almost every position on the team is up for grabs except catcher. “We feel like competition brings out the best in them, so they’re competing every day for starting positions”, Cheek said. “They’re competing for where they are going to hit in the batting order. They’re competing for who is going to be our day one starter on the mound. Everything is up for grabs. Our only real sure thing is who is playing catcher right now.” The catcher position has been solidified by senior Wade Law. Law takes over for Jarrod Wall, who started catching for the Wildcats a year ago. According to Cheek, Wall did a phenomenal job behind the plate in 2017.