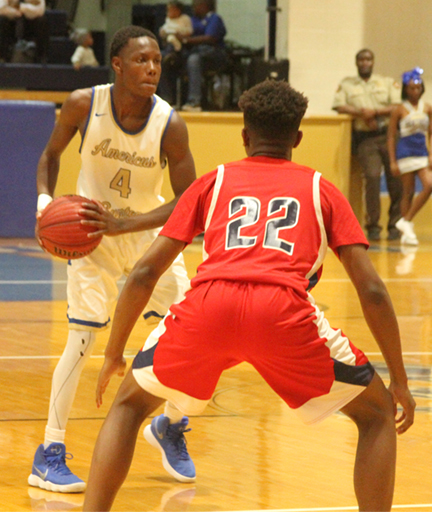 AMERICUS – Americus-Sumter (24-2) used a 12-0 run in the first quarter to set the tone and take control on their way to an 88-58 victory over Northside-Columbus in the semifinals of the Region 1-AAAA Boys Basketball Tournament Thursday night, February 8, at Americus-Sumter High School.
The win puts the number one seeded Panthers in the region championship against Westover on Friday, February 9, at 8:30 p.m. ASH has already qualified for the GHSA Class 4A State Tournament.
The two teams split during the regular season, and both games were extremely competitive. Americus-Sumter lost to the Patriots at home 58-56 on December 12, 2017. The Panthers won at Northside in overtime 57-55 on January 9.  One would figure that Thursday night’s region tournament semifinal game would be no different. It was much different.
“I’m really happy that we came out and played aggressive. That was our mindset: coming out being aggressive offensively and defensively”, Americus-Sumter Head Coach Michael Hoffpauir said. “This team (Northside-Columbus) beat us here on our home floor and we went to overtime at their place to get the win. We knew it was going to be a scrappy game, but we were very, very adamant about coming out aggressive and we did that.” 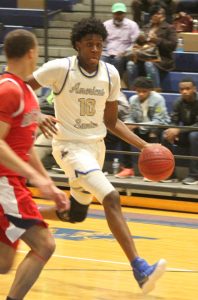 Americus-Sumter forward Joshua Lusane drives to the basket. He led the Panthers with 20 points against Northside-Columbus

Joshua Lusane led the Panthers with 20 points and both Eric Hall and Karmil Hamilton scored 19. Northside (16-9) had four players in double figures. Jalen Tucker led the Patriots with 17 points. Jhaquez Anderson had 12. Aaron Green had 11, and Jordan Richardson chipped in 10.
The game was evenly matched during the first few minutes of the first quarter. Northside took a 9-5 lead thanks to a three-pointer by Chance Hatcher. Americus-Sumter guard Eric Hall responded with a three-pointer of his own to cut the margin to one.  The two teams continued to play fairly evenly the next couple of minutes, with ASH owning a 17-13 lead. However, that’s when the Panthers blew the doors off the Patriots to take full control of the game. They used full-court pressure to create turnovers and turn them into points. ASH went on a 12-0 run to close out the first quarter with a 29-13 lead.
Americus-Sumter continued to put the pressure on Northside. The Panthers outscored the Patriots 25-14 in the second quarter. They continued their full-court pressure, and they also pounded the ball inside to Joshua Lusane, who scored on a couple of dunks. By the time halftime arrived, the Panthers were in total control, leading 54-27.
ASH already had three players in double-figures by halftime. Eric Hall and Joshua Lusane each had 15 points, while Karmil Hamilton had 13. As for Northside, they were led in the first half by Jalen Tucker with 15 points. Tucker was held to just one two-point basket for the rest of the game.
The Panthers didn’t take their foot off the gas pedal in the second half. They continued to apply full-court pressure on the Patriots. Having an advantage on the inside, the Panthers continued to pound the ball inside to Lusane, who was able to score. Northside was never able to mount a serious attack, and the Panthers won going away 88-58.
“I think we came out and played aggressive against Northside”, Joshua Lusane said. “We already knew that we wanted our rematch from them. They beat us one time, so we just wanted to come in and dominate.”