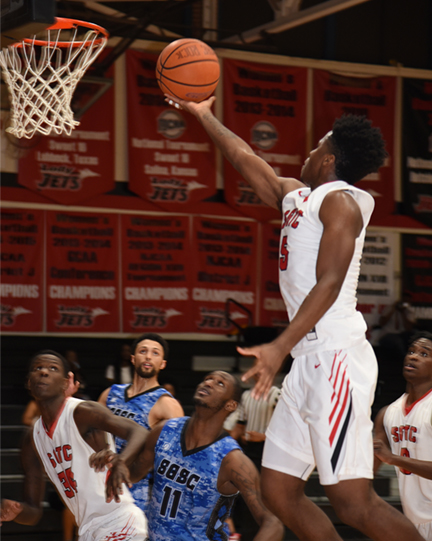 AMERICUS – Down by two with 6.4 seconds to go, the Jets relied on Sophomore guard Rico Simmons to try to tie the game at the end of regulation. Simmons drove to the basket and scored. However, an offensive foul was called against Simmons, and the Jets fell to South Georgia State 82-80 at the Hanger on Wednesday, February 21.

With the win, South Georgia State secures second place in the GCAA. “We did not play well at all,” Jets Head Coach Travis Garrett said. “We shot less than 30% in the first half and only 54% in the second half. We were off offensively, but we were still able to stay in the game. We just have to come ready to play for the remainder of the regular season and get ready for the tournament.”

Sophomores Mike Boone and DeVante Foster led the Jets in scoring with 20 points each. Foster had six rebounds and two assists, while Boone had five rebounds and one assist.

Sophomore guard Dawan Bass was also in double-figures for the Jets. Bass scored 16 points in the losing cause.

Both the Jets and Lady Jets travel to Albany on Saturday, February 24, to take on Albany Tech. Tip-off four the Lady Jets’ game is at 2 p.m., followed by the Jets at 4 p.m.