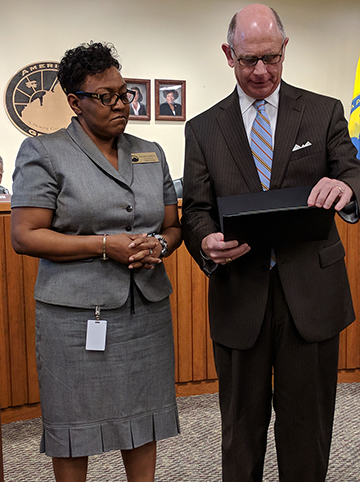 AMERICUS — The Americus mayor and city council met Thursday for its regular monthly session.
Several people were on the agenda to speak.
The mayor presented a proclamation to Kenyada Jones, honorary council member for February invited by council member Juanita Wilson. The mayor was to administer the oath of office to Calvin Wright who has been appointed to the Americus-Sumter County Tourism Council, but Wright was not present.
A certificate of recognition was given to the city of Americus and Diadra Powell, CFO, for Excellence in Financial Reporting for FY 2016. Mayor Barry Blount commented that this is the first time in 29 years the city has received such recognition and thanked Powell and her entire staff.
Mary Ann Rouse of ch2m, which contracts with the city for water treatment services, gave an update. Michael Harris, a scout with Troop 16, Americus, gave a presentation on his Eagle Scout service project which is to build an activity trail, with signage, in Rees Park. The trail is designed to promote healthy lifestyles, Harris said, and will include six fitness stations and four distance markers. Juanita Wilson moved to accept the Boy Scout’s plan which was seconded by council member Daryl Dowdell and passed unanimously.
Kizzy Mable, a concerned citizen, addressed mayor and council about the need for “some type of programs” to prevent crime in the city, such as the Austin Center. She referenced the recent shooting which killed one man and seriously injured another and said the “citizens need programs so they don’t
have to call 911 all the time.”
David Hawkins, representing the Austin Center, also addressed the city government, asking where he stands on the city funding the program for approximately $100,000. The mayor invited Hawkins to make a presentation at the city’s upcoming retreat being that the original presentation had been made more than a year ago and he couldn’t recall much about it. Blount also said other entities such as One Sumter, the county, the housing authority, etc., should be involved since he’s not sure the city can fund that amount.
Items voted on included the following.
• Approved an alcohol beverage license for Save-a-lot, 204 Manhattan St.
• Approved an alcohol beverage license for Walgreens, 1442 E. Lamar St., which has been purchased by Rite Aid.
• Approved an agreement between the city and Friends of Downtown Americus for services related to the Facade Grant Program.
• Approved the utility bill customer bill format change which will be implemented March 15.
• Authorized a change order in the amount of $95,000 for Phase II Paving/Resurfacing project. The project has been completed except for Varsity Drive, small portion of Lafayette Street and striping. Multiple complications were uncovered involving gas and water lines while dealing with drainage issues in the Parker Street/Varsity Drive area.
• Approved a request from the City Federation of Colored Women Club to include the property at 133 J.R. Campbell St., site of the Americus Colored Hospital, in the city’s Historic District. The request was approved by the city’s Historic Preservation Commission and supported by the city’s Planning Commission.
• Approved the reappointment of Eddye Coley to the Lake Blackshear Regional Library board.
One item on the agenda was not approved.
Mark Minick, a downtown merchant, requested variance to allow a worship center to be allowed at 303 W. Lamar St. The mayor commented, “There are plenty of other places for a church to locate besides downtown. It’s called the Central Business District for a reason.” The request died on the floor for the  lack of a motion, and so was denied.