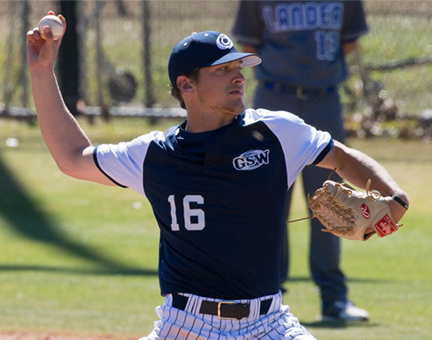 AMERICUS – After a tough 7-1 loss to Augusta University Friday night, February 23, the GSW Hurricane Baseball Team was hoping to at least get one win in the double-header on Saturday, February 24. However, the Jaguars took game one 8-4, and then won a hard-fought, extra-inning game three over the Hurricanes 11-9.

In game two, the Jaguars got one run in the top of the first inning when Harrison Moore hit a sacrifice fly, scoring Devin Bilardello, who was on third. The Hurricanes responded and got tied the game in the bottom of the third. With two men on, Andy Moore singled to right center, driving in Kole Clark to tie the ball game at 1-1. However, the damage came in the top of the fifth when Augusta scored four runs. The Jaguars had two men on when Bakari Gayle singled to right field, driving in two runs. The Jaguars were able to get multiple runners on base before Harrison Moore singled to left field, driving in two more runs. At this point, it was 5-1 Augusta University.

In the bottom of the fifth, The Hurricanes were able to get a run. Josh Logan was able to get on base and eventually scored an unearned run on a sacrifice fly by Jared Jones. The Hurricanes got two more runs in the bottom of the sixth when they loaded the bases. Kole Clark was hit by a pitch, scoring Bradley Hough. Dakota Long advanced to third and Tyler Skelton advanced to second. Then Josh Logan reached on a fielder’s choice, driving in Long. At this point, the Hurricanes had cut the Jaguars’ lead to 5-4.

However, Augusta University got two more runs in the top of the eighth inning. Harrison Moore got on base and eventually advance to third, then scored on a wild pitch. Jim Wagner was able to get on base and advance to third. Then Caleb McElwaney singled, driving in Wagner to give the Jaguars a 7-3 lead.

Augusta got one more insurance run in the top of the ninth, and the Hurricanes were unable to respond in their half of the ninth. As a result, Augusta University took game two by the score of 8-4.

The Hurricanes got production at the plate from designated hitter Andy Moore, who went 3 for 4 on the day. Centerfielder Josh Logan went 2 for 5, driving in a run and scoring one as well. Kole Clark, Jared Jones and Andy Moore also drove in RBIs For the Hurricanes.

The Hurricanes were desperate to salvage a game in this series. GSW took a 2-0 lead in the bottom of the first. With two runners on base, Danny Molinari reached on an error, scoring Jason Baita and advancing Kole Clark to third. Then Jared Jones singled, driving in Clark.

However, in the top of the third inning, Augusta responded with three runs of their own to take the lead. With two men on, Harrison Moore doubled down the right field line, scoring Bakari Gayle and advancing Zack Goble to third base. Then Ty Hobbs singled to center field, driving in two more runs. The Jaguars had taken a 3-2 lead.

Augusta added two more runs in the top of the fourth. With Brent Alford on base, Bakari Gayle tripled to right center, scoring Alford. Then Zack Goble singled to left field, scoring Gayle. This gave the Jaguars a 5-2 lead.  The Jaguars scored two more runs: one in the fifth and one in the sixth to give Augusta a 7-2 lead.

However, Georgia Southwestern State would not go quietly. In the bottom of the seventh, Molinari, Logan and Austin Langford got on base. Then Andy Moore doubled to left center, driving in three runs. The Hurricanes were back in it, trailing only 7-5.

GSW was able to hold the Jaguars to no runs in the top of the eighth. In the bottom of the eighth, the Hurricanes were able to score two runs to tie the game at 7-7. After Tyler Skelton got on base, Austin Langford singled to center, scoring Skelton. Then Kole Clark doubled down the left field line, scoring Langford. The game was tied at 7 a piece going into the ninth.

However, Augusta’s Brent Alford and Jay Pendley both got on base in the top of the ninth. Then Devin Bilardello singled to center field, scoring Alford. The Jaguars had taken an 8-7 lead.

In the top of the 10th, The Jaguars responded with three runs in their half of the inning. The Hurricanes would once again have to fight back.

The Hurricanes were able to get one run in the bottom of the 10th, but it would not be enough as Augusta University took game three 11-9 in 10 innings and swept the three-game series. Both Danny Molinari and Josh Logan went 2 for 5 in game three. Andy Moore went 1 for 5, but drove in three RBIs. Augusta’s Zack Goble did the most damage at the plate, going 2 for 4 and driving in three RBIs.

On the mound for Augusta University, starting pitcher Sam Goberdhan pitched 6.0 innings. He gave up three runs on six hits, walked one and struck out nine. Zack Goble got the win in relief for the Jaguars. He pitched one inning, giving up one run on two hits. His record goes to 2-0. As for GSW, Stewart Tyler started the game. Tyler pitched 3.2 innings, giving up five runs on seven hits. He walked three and struck out six batters. Relief pitcher Sage Holderfield took the loss. He pitched 0.1 innings, giving up three runs on three hits. He walked one and struck out none. His record is now 1-2.

The Hurricanes (2-9), having lost nine in a row, will try to stop the losing streak when they step out of conference play to host Valdosta State on Wednesday, February 28. First pitch is scheduled for 5 p.m.