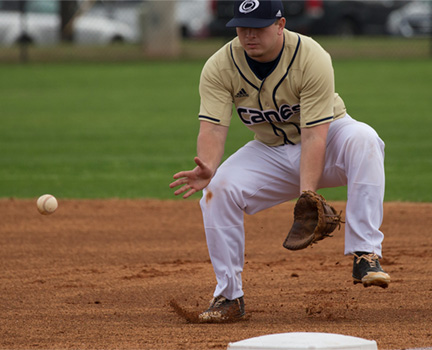 GSW First Baseman Jared Jones went 4-for-10 for the series. He belted two home runs and drove in four RBIs. Photo by GSW

Jared Jones and Josh Logan led the Hurricanes at the plate during the series as both went 4-for-10. Jones hit two home runs and drove in four RBIs.

The Hurricanes will have a few days to work things out before travelling to Flagler College on Saturday, March 10, for a three-game series. They will play a doubleheader on Saturday and play the third game of the series on Sunday, March 11. The first game on Saturday begins at 1 p.m., followed by the second game at 4 p.m. Sunday’s game will start at 1 p.m.

North Georgia won the first game 7-1. The Nighthawks scored one r run each in the second and third innings before scoring four in the fourth, blowing the game open. GSW scored its only run in the eighth inning as Dakota Long opened the inning with a double and scored on a ground out of Jonathan Martin.

Andy Moore went 2-for-4 in the opener to lead the Hurricanes.

GSW Starting Pitcher Mitch Holloway (-1-3) suffered the loss. Harrison Timberlake threw 4 1/3 innings of relief and held the Nighthawks to one run and three hits. He walked one and struck out three.

In Game 2, North Georgia scored two in the first inning, two in the third and blew the game open by scoring six runs in the fifth on their way to defeating the Hurricanes 17-4. The Hurricanes scored a run in the seventh when Jones led off the frame with a solo home run, his first of the season. Jones drove in three in the eighth inning, highlighted by an RBI-double from Kole Clark and an RBI-single from Martin.

Bradley Hough had a good day at the plate, going 3-for-4 at the plate to lead the Hurricanes. Clark and Jason Baita added two hits apiece.

The Hurricanes were hoping to salvage a game in the series, but it was not to be as North Georgia defeated GSW 5-3, sweeping the series. Through the first five innings of Game 3, the starting pitching for both teams was outstanding. The Hurricanes broke the deadlock in the sixth as Baita opened the inning with a single. Baita then made his way to third on a Josh Logan single and scored off a sacrifice fly by Andy Moore.

The Nighthawks answered in the bottom of the sixth. Andres Perez led off with a home run, his fourth of the series. The Nighthawks were able to take a 2-1 lead on two singles and two passed balls by the Hurricanes.

In the top of the ninth, Andy Moore singled to get on base. Then Jones delivered his second home run of the season, giving the Hurricanes a 3-2 lead.

In the bottom half of the ninth, North Georgia drew a walk. The man on first advanced to second on a sacrifice bunt. After a fly out, Perez was intentionally walked and the Nighthawks’ Connor Corbitt sent a 1-2 pitch over the left field wall to end the game.