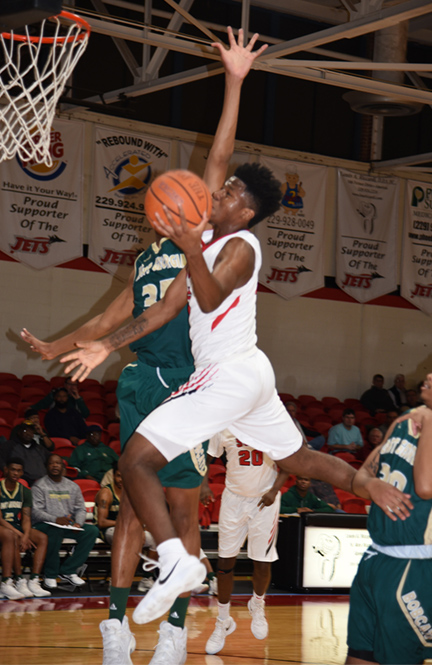 Mike Boone (5) led the Jets in scoring with 19 points in their first-round win in the NJCAA Region XVII tournament. Photo by SGT

AMERICUS – South Georgia Tech scored an impressive 91-69 victory over East Georgia State in the first round of the NJCAA Region XVII Division I Men’s Basketball Tournament at the Hanger on Tuesday night, March 6.

With the win, the Jets advance to the semi-final round, where they will take on Georgia Highlands, the number one seeded team in the tournament. The game will take place in Rome, GA Friday night, March 10, at 7:30 p.m. The winner of that game advances to the finals to be played Saturday, March 11, at 3 p.m. in Rome, GA.

Each of the top four teams in the GCAA won in the quarter-final round of the tournament. The top-ranked Georgia Highlands Chargers defeated eighth-seeded Andrew College 91-78. The number two seeded Central Georgia Tech took out the number seven seed Albany Tech 76-54, and the number three seed South Georgia State defeated sixth seeded Gordon State 114-105 in a shootout.

“Survive and advance, that’s the name of the game this time of year,” SGT Head Coach Travis Garrett said. “Our guys did a good job of taking care of business against East Georgia State College, but now we have to rise to the occasion to keep the season alive. It will be tough to beat the top-ranked Georgia Highlands Chargers on their home court Friday night, but if we play well, this group of guys can pull it off.”

The last time the two teams met, Georgia Highlands beat SGT at the Hanger 82-80 on Saturday, February 10. The Jets also lost to Georgia Highlands in Rome by the score of 87-82 on Wednesday, January 10. “We can beat Georgia Highlands, but we have to play,” Garrett said. “They are not going to give us anything. We will have to earn it.”

The winner of the Jets-Chargers game will face the winner of the game between South Georgia State and Central Georgia Tech game. The championship game will be played on Saturday, March 10, in Rome, GA at 3 p.m.

SGT shot 62.1% from the field in the second half against East Georgia State Tuesday night, March 6. They hit 57.1% from beyond the arc during the second half. They shot above 50% from the floor and from three-point land.

Five Jets scored in double-figures. Mike Boone led the scoring with 19 points, pulled down three rebounds and recorded one assist. Dawan Bass scored 14 points on the night and grabbed three rebounds and had two assists. DeVante Foster closed out the double-digit scoring, recording a double-double. Foster scored 11 points and grabbed 14 rebounds for the Jets.

Foster was the only Jet with a double-double in the tournament game.

The Jets are now 19-11 overall. They finished in fourth place in the GCAA with a conferenced record of 11-5. Last season, the Jets were seventh in the regular season, but finished as the NJCAA Region XVII Conference runner-ups.