Schley County gets pounded by Brookstone 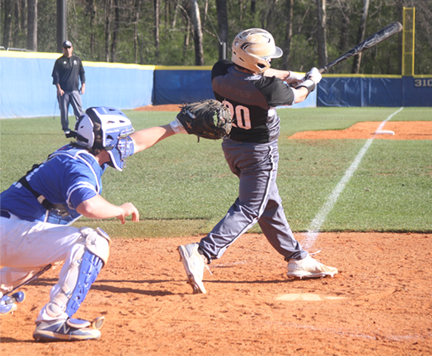 Schley County’s Trent Bivins at the plate for the Wildcats against Brookstone. Photo by Ken Gustafson

COLUMBUS – The Schley County Baseball Team ran into a buzz saw Thursday afternoon, March 15, when they faced a tough Region 4-1A opponent in Brookstone. The Cougars scored seven runs on five hits, four walks and an error in the bottom of the second inning on their way to run-ruling the Wildcats 12-2 in the fifth inning at the Brookstone baseball field.

“They’re excellent. They’ve been great for a long time,” Schley County Head Coach Chuck Cheek said. “In the 15 years I’ve been at Schley, it’s always been us and Brookstone. We’ve gotten some and they got us today. We’ve got a chance to take care of business. We’ll play them later in the season for a region championship. We’ve got to get better, and we’ve got to take care of our business along the way.”

Things started off well for the Wildcats. In the top of the second inning, Wade Law led off with a single, and Ashton Goodin belted a two-run homer to give the Wildcats and early 2-0 lead.

However, that would be it for Schley County as far as offense was concerned. From then on, it was all Cougars. 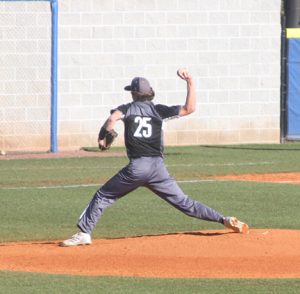 Ashton Goodin pitching in relief for the Wildcats. He belted a two-run homer in the top of the second inning against Brookstone.
Photo by Ken Gustafson

Brookstone had loaded the bases in the top of the first, but Schley County Starting Pitcher Lorne Barineau was able to get out of the jam without any runs scoring. However, that was not the case in the bottom of the second. Brookstone’s Trey Lingo reached on an error to lead off the inning. Then second baseman Bo Voltz singled, driving in the Cougars’ first run of the game. Ben Sloan then hit into a fielder’s choice, moving the runners up. Jeremiah Burgess then flew out, advancing the runners. The Cougars then followed with three more hits, driving in three more runs. Jack Little, Richard Hill and Jackson Milner all singled. Little drove in one run and Milner drove in two. At that point, Barineau was relieved by Trent Bivins, who came in to face Banks Massey. Massey singled, then Trey Sanders reached on a walk. He was followed by Lingo, who drew an RBI walk, scoring a run. Voltz then reached on a walk, which scored another run. Ben Sloan came to the plate, and drew two balls and one strike before Bivins was relieved by Ashton Goodin. Inheriting a 2 and 1 count to Sloan, Goodin threw two more balls, walking Sloan. At this point, there were two outs in the inning, and the Cougars led 7-2. The inning finally ended when Jeremiah Burgess lined out to Schley second baseman Camron Vanlerberghe.

The Cougars scored one run in the fourth when Trey Lingo belted a solo home run over the left-field wall. Brookstone added four more runs in the fifth to end the game.

Brookstone starter Jack Little went the distance. He went five innings and gave up only two runs on three hits. The two runs came on the second-inning home run by Goodin. Little walked none and struck out nine Wildcats.

Chance Hollomon, Wade Law and Ashton Goodin each went 1 for 2 in the game, with Goodin’s hit being the two-run homer. Jackson Milner did most of the damage for Brookstone. He went 3 for 4 and drove in three RBIs.

Schley County was scheduled to play Johns Creek Saturday, March 17, at Cool Ray Field in Lawrenceville, GA, but the game has been postponed due to a forecast for rain.

Schley County falls to 8-2 overall and 6-1 in Region 4-1A play. Brookstone is 15-2 overall and remains undefeated in the region at 6-0. The Wildcats’ next region game will be at home against Hawkinsville on Tuesday, March 20, at 5:30 p.m.