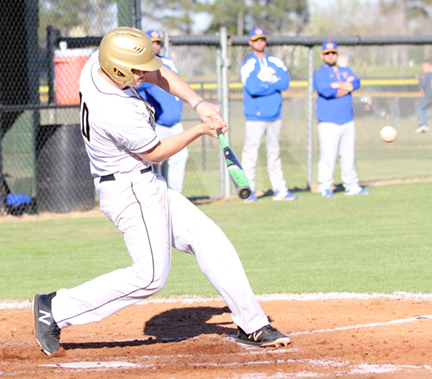 Southland shortstop Hunter McCain went 2 for 3 with 2 doubles in the 12-2 win over Crisp Academy. photo by Sheri Bass

CORDELE – The Southland Academy Raider Baseball Team (2-3) scored five runs in the first inning, five in the second, one in the third and one in the fourth inning to put the game out of reach and route Crisp Academy 12-2 on Thursday, March 15, at Crisp Academy.

The Raiders took advantage of several walks and wild pitches by Crisp Academy pitching to win going away. Southland Senior Starting Pitcher Harrison Bell got the win. He worked five innings, giving up one run on four hits. He struck out nine and walked one.

“It was a good win for us. We needed one of those where we come out and jump up early,” Southland Head Coach John Brady said. “That took the pressure off. I can tell you that. Harrison pitched the ball really well and we hit a lot of balls hard, so it was a good day for sure.”

In the top of the first inning, with a man on first, Tyler Kennedy hit into a fielder’s choice, but advanced all the way around to score on two wild pitches and an error on Crisp Academy. Both Harrison Bell and Hunter McCain both drew walks. After Ross Minick grounded out, George Wall reached on an error and Luke Law drew a walk. As a result of the walks, errors and wild pitches, three runs crossed the plate for the Raiders. Two more runs would score as Steven Barnes, Landon Law and Clay Owens drew walks.

The Raiders scored five more runs in the second. Harrison Bell was hit by a pitch to lead off the inning. Then Hunter McCain doubled in an RBI. A fly out by Ross Minick would move McCain to third, then he would score on an RBI single by Wall. Both Luke Law and Steven Barnes drew walks, and both would score on a double by Landon Law. Wild pitches by the wildcats’ pitcher also contributed to the Raiders’ run production.

The Wildcats’ only run came in the fourth inning, but that would be all they would get.

Harrison Bell led off the top of the third with a home run. After a Hunter McCain double, Minick hit into a fielder’s choice, advancing McCain to third. George Wall was hit by a pitch, but was thrown out a second when Luke Law hit into a fielder’s choice. Barnes was then hit by a pitch, and the Raiders had runners at first and second with two outs. However, Landon Law flew out to centerfield to end the inning.

The Raiders got one run in the third and one in the fourth to complete their scoring.

Wall went 2 for 3 at the plate, scoring two runs and driving in three RBIs. Landon Law went 1 for 2, driving in two RBIs.