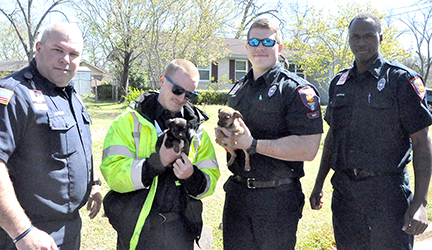 From left with the puppies are Engineer Stevie Lowery, and Firefighters Christopher Scott, Billy Jones and Jason Hudson with Americus Fire & Emergency Services.

vAMERICUS — Three puppies were given a second chance on Wednesday in Americus and Andersonville. They were rescued.
The first rescue occurred at 12:12 p.m. in the 1300 block of Madison Street when Americus Fire & Emergency Services were called. A passerby had seen two puppies fall into a storm drain. Firefighters were able to retrieve the two young dogs as others 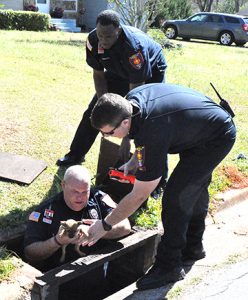 from the litter and several neighbors stood by.
Then, shortly before 6 p.m. Wednesday, Sumter County Fire & Rescue received a call to a structure in the 200 block of South Freeman Avenue in Andersonville. They found a fire in the kitchen but smoke had spread into the rear bedrooms where they 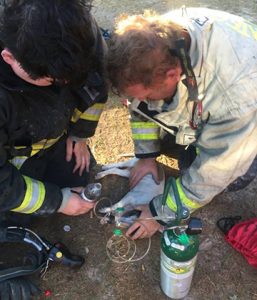 Battalion Chief Clint Boley, at left, and Firefighter Rick Bell, at right, with Sumter County Fire & Rescue, are shown resuscitating the puppy they found unresponsive in a house that had experienced a kitchen fire in Andersonville.

found an unresponsive puppy. The fire was confined to the kitchen area and was quickly extinguished. The small pet dog was discovered not breathing due to the smoke.
Battalion Chief Clint Boley and Firefighter Rick Bell utilized a pet oxygen resuscitation kit to revive the dog which was returned back to the home owners. NICHOLE BUCHANAN/ATR
From left with the puppies are Engineer Stevie Lowery, and Firefighters Christopher Scott, Billy Jones and Jason Hudson with Americus Fire & Emergency Services.

GDOT: South Lee Street bridge to be replaced at…