Overall, the Southland girls finished in third place as a team with 89 points. The Lady Raiders finished four points ahead of fourth-place Brookwood. Westwood finished in second with 100 points, and the host school, Deerfield-Windsor, finished in first place with 158 points.

The Southland boys finished in second place overall with 109 points, but almost 100 points behind Deerfield-Windsor, who scored 201 points.

“Everybody did well. They ran hard…left it all on the track,” Southland head coach Nathan Hammack said. “It’s hard to run in 35 mile-an-hour winds. I’m proud of the kids. They didn’t hold anything back. They didn’t back away from everything. They ran as hard as they could. They did their best. 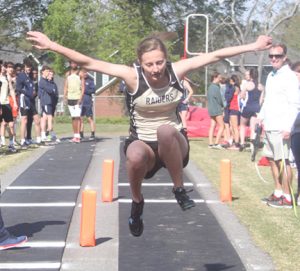 Though he came in sixth place in the Boys 800 Meters, Southland senior Morgan Youngdale gave it everything he had on the track in extremely rough conditions. He finished in a time of 2:32.22. “I felt really slow. I need to work on running faster and longer,” Youngdale said. “The first lap needs to be faster. I had to be able to make up that speed and keep it up.”