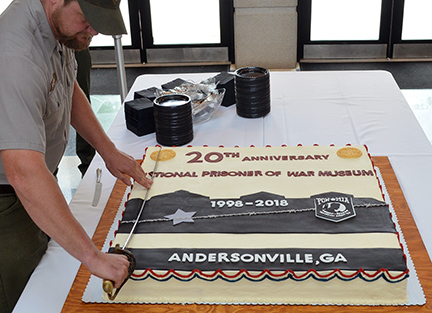 The cake commemorating the 20th anniversary of the National Prisoner of War Museum was cut and served after the service.

ANDERSONVILLE — The 20th anniversary of the National Prisoner of War Museum at Andersonville National Historic Site was an extraordinary celebration but was much more than an elaborate birthday party with lots of fanfare.
There was patriotic music, a helicopter/reconnaissance plane flyover, patriotic speeches and recognition of varied organizations, but the tribute also drew together military veterans and former prisoners of war from across the generations and from coast to coast, along with their families and friends and many others.
The pinnacle was when former POWS representing World War II, Vietnam and the Gulf War recapped their experiences of survival. Their incredible stories of horror and triumph had common threads that held them together: patriotism for country, faith in God, and survival —  accounts that stirred emotions from joy to tears.
A chill breeze blew and clouds hovered as the crowd of more than 300 gathered together under the large tented area on the rear lawn of the impressive stone Museum building dedicated to interpreting the American war experience, that opened April 9, 1998.
Charles Sellars, superintendent of Andersonville National Historic Site, warmly welcomed everyone, and the audience stood at attention to salute the colors advanced by Lee County High School Navy Junior Reserve Officer Training Corps (NJROTC), followed by the National Anthem played by the U.S. Army Maneuver Center of Excellence from Fort Benning. 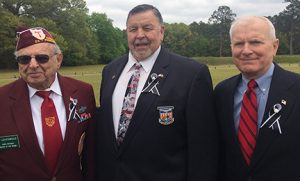 The three principal speakers are all former prisoners of war, from left, Sy Lichtenfeld from World War II, Bill Robinson from the Vietnam War, and David Eberly from the Gulf War.

Then the clouds suddenly parted and the sun timidly peeped through just as the L-19 reconnaissance plane and Huey helicopter simultaneously soared overhead, making several passes before the helicopter set down for the remainder of the celebration.
“If I had a one-liner about my POW experience it would be that it was an endurance race,” said Bill Robinson, 75, a POW in Vietnam for eight years. “We (the other POWs) rolled with the punches and took one day at a time. Our motto was to never give up or give in and return with honor; we kept the faith in ourselves and each other. Never again should this great nation fight a war without the support and commitment of our entire country.”
Robinson (USAF ret.) was serving as a crew chief on a U.S. Air Force rescue helicopter when he was captured in the Tinh Province of North Vietnam on Sept. 25, 1965. He wasn’t released until February 1973. He recounted his short stay at the infamous “Hanoi Hilton” and the multiple Vietnamese prison camps, including Briar Patch and various compounds. He talked about the daily hardships and almost no rations and how he was subjected to the full range of the North Vietnamese’s torture program, including six months of solitary confinement.
“Some dreams and some lives were put on hold or lost all together; our concern was to defend that dream — God bless America,” said Robinson in closing.
The senior speaker Sy (Seymour) Lichtenfeld, 93, of Mobile, Alabama, served almost three years in the U.S. Army combat infantry and airborne units during World War II. During the fierce Battle of the Bulge his unit was surrounded by the enemy and after three days of fighting, he ran out of ammunition and was captured in December 1944. He was 19.
A Jewish-American soldier, Lichtenfeld spent five months at four different Nazi prison camps. At one point, he was forced with other POWs to march 110 miles from one prison camp to another. “We marched in near zero type weather and my combat boots wore out,” said Lichtenfeld. “One G.I. gave me part of his blanket to wrap around my frozen feet … many POWs died during that march … when we went through villages the townspeople of all ages even the children spit on us and threw stones and rocks; women tossed pans of cold water on us from second floor windows, drenching us even more. We slept in fields at night surrounded by vicious German shepherd dogs and had almost no rations at all.”
Finally liberated by the Russian Army on April 22, 1945, Lichtenfeld and other POWs soon realized the Russians were taking them on the long route back to American lines. He and two other G.I.s set out alone to find and reconnect with the American Army. “We had to forge for food and slept in the fields at night before we reached the American lines on the west side of the Elba River and then we had to prove our identification,” said Lichtenfeld. “It was May 8, 1945 — ironically the same day that Germany surrendered — Victory in Europe Day.
“To this day. I like to say the Germans surrendered because they heard I had rejoined the American Army,” said Lichtenfeld, his remarks drawing a mixture of laughter and applause that brightened the dark moment.
Col. David Eberly (USAF Ret.) of Indiana, presently chief executive officer of the American Ex-POW organization, spoke passionately about his captivity during the Gulf War. Eberly, a fifth-generation airman, participated in the initial air strike into Iraq in January 1991. While on the fourth night of the campaign, he was shot down and, after evading the enemy for three days, was captured on the Syrian Border.
“I spent time in isolation,” said Eberly, “but after 44 days I was released.” He continued, saying the POW experience and others that have taken him through the journey of life beyond all imagination holds “blessings of eternal value and freedom; our faith has endured.”
Eberly thanked and recognized the American Ex-POW organization that partners with the museum.
Others on the program were Congressman Sanford Bishop Jr., D., Columbus; Maj. Gen. Craig Crenshaw, commanding general at the U.S. Marine Corps Logistics Command, Albany; Jim Covington, president of the Friends of Andersonville, the support organization of the Andersonville Historic Site and Cemetery; and the Lee County High School NROTC drill team.
The Rev. Barbara Koch, pastor at Mount Zion-St. Luke Lutheran Church, Oglethorpe, gave the invocation, and the formalities closed with an awesome bagpipe rendition of “Amazing Grace” piped by Col. Dan Gillan (USMC Ret).