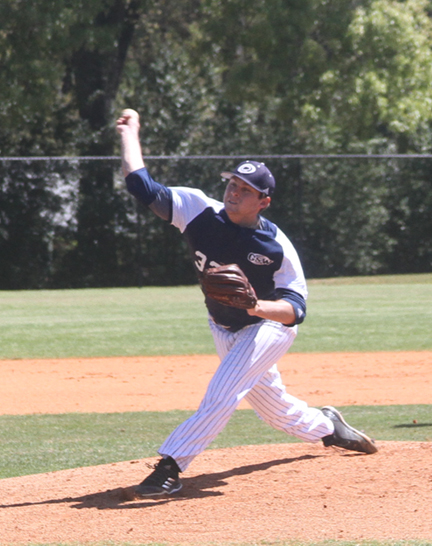 GSW Senior Pitcher Kyle Spinks struck out eight batters on his way to leading the Hurricanes to a 4-3 win over Francis Marion in Game 3 of a three-game series. ATR Archive Photo by Ken Gustafson

FLORENCE, SC – The GSW baseball team lost the first two games of their three-game series on Saturday, April 21, by the scores of 11-8 and 13-3. However, they were able to salvage Game 3 on Sunday, April 22, with a 4-3 win at FMU’s Sparrow Stadium.

In Game 2, it was all Francis Marion. The Patriots scored two in the first and three in the second to take an early 5-0 lead. They then scored one run in the third, three in the fourth and four in the fifth to take a commanding 13-0 lead. GSW scored one run in the top of the third, one in the seventh and one in the eighth to round out their scoring.

Bradley Hough went 3-for-4 in Game 2, the best performance of a GSW hitter in that game. Jared Jones went 2-for-4 with an RBI. Tyler Skelton went 2-for-4 and scored a run, and Danny Molinari went 2-for-5 with an RBI. Steven Cox went 4-for-4 for the Patriots and scored three runs. Hinnant had another outstanding game at the plate, going 3-for-4, scoring four runs and driving in two RBIs. Trey Chapman went 1-for-4 for FMU, but that one hit was a home run off GSW reliever Matt Hubbard.

Evan Flynn (2-4) was the winning pitcher for FMU in Game 2. Flynn pitched seven innings, giving up two runs on 11 hits. He walked two and struck out five.

On Sunday, April 22, fortunes changed for GSW. In Game 3, the Hurricanes scored one run in the second, one in the third and two in the fifth to salvage a 4-3 victory in Game 3.

Josh Logan went 2-for-5 and drove in an RBI for the Hurricanes. Jason Baita also contributed to the win. Baita went 1-for-3 and scored two runs. Gage Taylor went 2-for-3 for the Patriots in Game 3 and scored a run.

Kyle Spinks (2-6) got the win for GSW. Spinks pitched 7.2 innings, giving up three runs on five hits. He walked three and struck out eight. Harrison Timberlake came on in relief for Spinks. Timberlake pitched 1.1 innings, only giving up a hit and striking out one batter.

Austin Roseberry (3-2) took the loss for FMU. Roseberry pitched 4.1 innings, giving up all four of the Hurricanes’ runs on four hits. He walked two and struck out two.

The Hurricanes (9-32, 5-22 PBC) will travel to Alabama to take on Tuskegee University on Tuesday, April 24. First pitch is scheduled for 5 p.m. They will finish out the season with a trip to Pembroke, NC to take on UNC Pembroke on Saturday and Sunday, April 28-29. The first pitch for Game 1 of that series is scheduled for Saturday, April 28, at 1 p.m. The Hurricanes have been mathematically eliminated from the race for the eighth and final berth in the Peach Belt Conference Tournament.