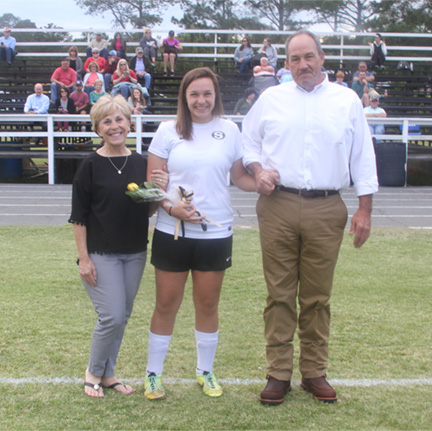 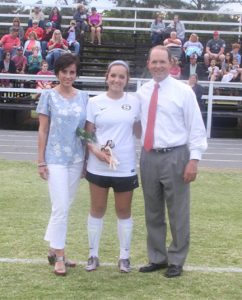 AMERICUS – It was Senior Day for the Southland Academy Girls Soccer Team as they honored four seniors: Joy Minor, Kathleen Kinslow, Bailey James and goalkeeper Abby Franklin. They, along with their parents, were all honored before the game began. Unfortunately for those four seniors, along with the rest of the Southland team, they fell to Terrell Academy in penalty kicks by the score of 6-5 in their last home game of the season on Tuesday, April 24, at Harvey Simpson Stadium.

“I thought we played hard and we played well. Both teams played hard and well,” Southland head coach Rundy Foster said. “There’s nothing to be ashamed of. We played as well as we could. It just came down to a coin flip at the end, and we ended up on the wrong side of it.” 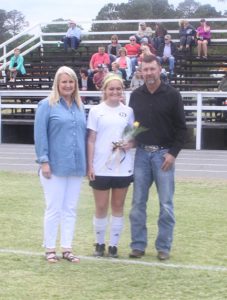 The score was tied 1-1 at the end of regulation. Both goals were scored in the second half. Terrell Academy took the lead with a little over nine minutes to go in the game when Jenna Cuff scored to give the Lady Eagles a 1-0 lead. However, the Lady Raiders struck back. With just under five minutes left in regulation, Kathleen Winslow took a shot from about 35 yards out. The ball sailed over the head of goalkeeper Sierra Brogdon and into the net for the equalizer, tying the score at 1-1. It was a back-and-forth affair between both teams for the remainder of regulation, but neither team could find the net. The game would have to go to overtime. 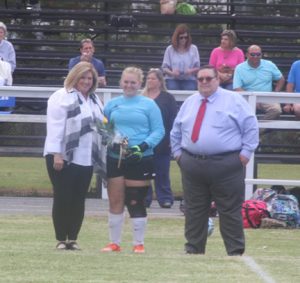 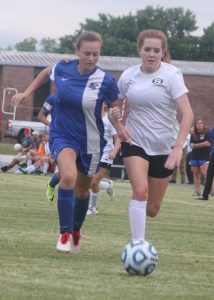 Players on both teams found the net. Other kicks either went wide of the net or over the crossbar. In total, a combined 14 players from both teams took penalty kicks. The penalty kick phase went almost three rounds. It was now in the sudden-death phase of the sequence.

The score was tied 5-5, and Terrell Academy’s Scarlet Minix stepped up to try to end the affair with a goal. Minnix’s shot went past a diving Abby Franklin and into the net to give the Lady Eagles the victory. 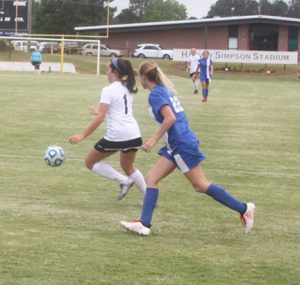 Southland Senior Kathleen Kinslow drives past Terrell defender Laiken Daniel and is about to take a shot on goal. Kinslow would later score in the second half to tie the game at 1-1.
Photo by Ken Gustafson

It was the second overtime loss in a row for Southland, having lost in overtime to Valwood 2-1 at home on Friday, April 20. That loss knocked the Lady Raiders out of playoff contention, but one wouldn’t know it being that they played extremely hard on Senior Day. Each team had several chances to score, but shots either went wide of the net, over the crossbar or right to the goalkeepers. 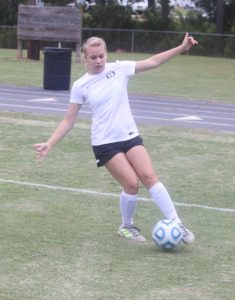 Southland’s Maddie Crisp about to cross the ball into the box.
Photo by Ken Gustafson

The game began with Terrell Academy controlling the run of play for the first few minutes of the match. However, Southland was able to get possession and create chances to score in the first half, as did the Lady Eagles. 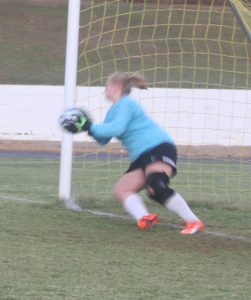 Southland Goalkeeper Abby Franklin makes a save on a penalty kick during the PK phase of the game.
Photo by Ken Gustafson

In the second half, the Lady Raiders had a golden opportunity as Kathleen Kinslow had the ball and dribbled past Brogdan, who came off her line. Kinslow then took a shot that many Southland fans thought went into the goal, but in reality, it hit the side netting.

Coach Foster was particularly pleased with the play of his goalkeeper, Abby Franklin. “She did well. Abby’s done a good job for us for four years now,” Foster said.

The Lady Raiders (1-9) have one more game before their season ends. They travel to Perry, GA to take on Westfield on Monday, April 30. Kick-off is scheduled for 6 p.m.