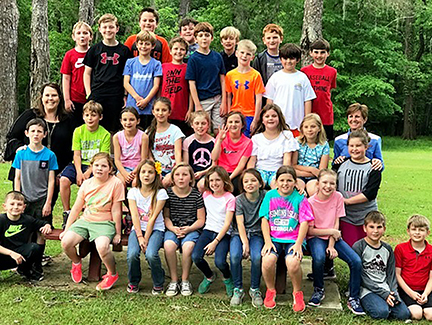 April Duke, third-grade teacher from Southland Academy, teamed up with Lee Drake from Trinity Christian School in Dublin to give their third-grade students an experience they would never forget. Both Duke and Drake assigned each of their students a pen pal. Students began in August writing introductory letters, and continued writing each other monthly. Students became instant friends; however, they were never able to see each other or know what the other looked like. On April 24, both classes met in Hawkinsville for a Pen Pal Picnic. Students played games to learn which pen pal they had been writing all year. They also played recreational games, had lunch together, and learned the importance of communicating with one another. While learning to write a personal letter and addressing an envelope was a skill addressed in the academic curriculum, nothing can compare to making a lifelong friend! Savannah Grace Ewing from Southland Academy said, ‘I will never forget meeting my pen pal. She looked just like I thought she would. We are going to be friends forever!’ Shown are Southland Academy third-graders in Duke’s class and their pen pals from Trinity Christian School.