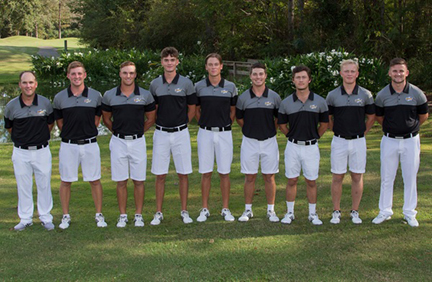 The GSW Men’s Golf Team is headed to the NCAA Regionals. Photo by GSW

The Hurricanes are coming off a fifth-place finish at the Peach Belt Conference Championship, which took place Friday through Sunday, April 13-15, at the Slammer and Squire Golf Course in St. Augustine, FL. Five PBC teams were selected to the Regional, including conference champion USC Aiken, along with Columbus State, Lander and Young Harris.

The top 11 teams in the country, according to Golfstat.com’s NCAA Division II Relative Rankings will be at the South/Southeast Region, led by No. 1- ranked University of West Florida. In all, 16 of the top 25 teams across the country will take on the course at Rock Barn Country Club.

Since GSW joined the NCAA, this is the fifth time the Hurricanes have made regionals. They were selected in 2012. 2013, 2015 and 2016. Four of the appearances have come under current Head Coach Darcy Donaldson.