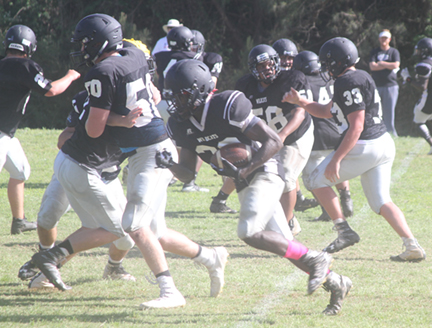 Running Back Jakim Williamson runs the ball on a running in play during the Wildcats’ Spring practice on Thursday, May 3. Photo by Ken Gustafson

ELLAVILLE – Like many high school football teams around our area, around the state of Georgia and around the country, the Schley County Wildcat Football Team hit the field this week for Spring practice. The Wildcats are beginning the process of shaking off the heartbreaking ending to the 2017 season. The Wildcats lost in heartbreaking fashion in the second round of the playoffs to Mitchell County 22-21 on a failed two-point conversion to try to win the game.

According to offensive lineman Archer Hathaway, who will be a junior in the Fall, the Wildcats tried to run the ball into the end zone away from his side of the line. “They (Mitchell County) were loading up my side, and we called a time out right before we were going to run the two-point conversion,” Hathaway said. “I was playing left tackle, and they loaded up my side (Hathaway was on the left side of the line), so we decided to run it on the right side instead. We ran it and we just came up short.”

In spite of the tough loss, the Wildcats had an excellent season in 2017. They went 8-4 on the year and made it into the second round of the playoffs. 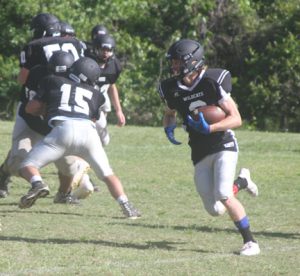 Wide Receiver Trent Davis runs with the football towards the end zone.
Photo by Ken Gustafson

However, all that is history. It’s a new year, a time to put away the past and move forward. That is what this Spring practice is all about for the Wildcats. It’s the beginning of a new season and a chance to go further than last year. Schley County Head Coach Darren Alford is very pleased with the progress his team has made in off-season preparation for the 2018 campaign. “We are having a really good Spring so far. Our guys are flying around the football. They’re working hard,” Alford said. “We’ve enjoyed a good off-season. We had a bad taste in our mouth losing to Mitchell County on that last play of the game. We want to get better than that, and our kids have really worked hard throughout the Fall and into the Winter. We’re just excited to be on the football field right now.”

According to Alford, as of right now, Garrett Peavy is slated to be the starting quarterback for the Wildcats. However, Peavy is trying to help lead the Schley County Baseball Team to their second straight Class A-Public state title, so he has not been able to participate in Spring drills. However, Jarrett Long, a rising sophomore, is getting a lot of reps and, according to Alford, is doing very well. “He’s done a really good job for us running the offense,” Alford said. “He’s mentally into things that he’s supposed to be doing. He’s working good. He’s working hard. We’ve got some improvement to do with him, but he’s going to get better.”

Alford went on to say that his team is capable of running different kinds of offenses. “We run a pro-style offense multiple,” Alford said. “We can go from spread. We’ll have five wide receivers on one play. The next play, we might be in two tight end all the way.”

On Thursday afternoon, May 3, the Wildcats worked on running and passing plays. Running back Jakim Williamson and wide receiver Trent Davis were able to show the coaching staff their abilities.

Schley County Football Team kneels for a closing prayer at the end of Thursday’s practice.
Photo by Ken Gustafson

Zykevious Walker, who also plays basketball for the Wildcats, will be a junior in the Fall and will play tight end and defensive end. He is very pleased with how Spring practice is going for him and the rest of his teammates. “It’s going pretty good. Everybody out here being active,” Walker said. “Everybody out here is supporting each other, and we’re just going at it.”

Ja’myron Clayton plays wide receiver and cornerback for the Wildcats. He will be a senior in the Fall of 2018. He said that Spring practice has been tough for some but easy for others, as for him, he’s use to it. “It’s easy for me. I’m use to it,” Clayton said. “I’ve been doing it for a good little minute.” For Archer Hathaway, Spring practice has been about him and the rest of the upper classmen teaching the rising freshman that will play next Fall. “We’ve been trying to coach up these younger kids that are coming up from eighth grade,” Hathaway said. “I expect us to do extremely well. I will be disappointed if we don’t go all the way.”

The Wildcats open the 2018 season at home on Friday, August 17, against Marion County. Kickoff is scheduled for 7:30 p.m.