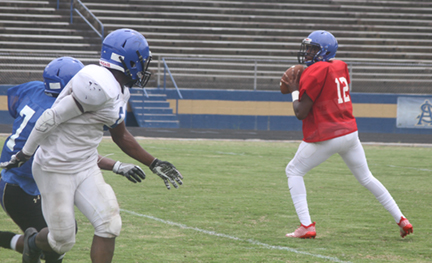 ASH quarterback Kierston Harvey in the pocket looking to throw. He ended up scrambling to his right. Photo by Ken Gustafson

AMERICUS – On Saturday afternoon, May 5, the Americus-Sumter football team gathered at Alton Shell Stadium to take part in an inter-squad scrimmage at Alton Shell Stadium. It was a chance for the players to get acclimated to game situations, and for the coaches to do more coaching. It was an opportunity for the players to learn from their mistakes in a game-like atmosphere, and for the players and coaches to build on the good things they accomplished during the scrimmage. It allowed them to take the things that they did, both right and wrong, into next Friday’s spring scrimmage against Southwest Macon, into the Summer practices and into the regular season next Fall.

Admission to the scrimmage was free, but fans were encouraged to bring jars of peanut or jelly to feed the team, and washing powders to wash the uniforms. 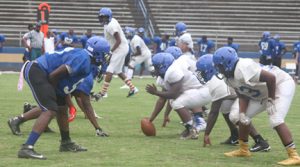 offensive (white) and defensive (blue) lines at the line of scrimmage.
Photo by Ken Gustafson

The teams were divided up by uniform colors. The defensive team wore blue and the offensive team wore white. After both sides went through pre-game warm ups and the field goal kickers kicked field goal practice kicks, it was time to get the game underway. There were some false starts on offense and off sides on defense, as one would expect in a real game, let alone a Spring scrimmage. There were some great plays made on both sides of the ball. Wide receiver David Sumnlin, who will be a senior next Fall, caught a pass from quarterback Kenova Willoughby and ran the ball about 60 yards down inside the 10-yard line. “I feel pretty good about my performance, but I’ve got to keep working and get better,” Sumlin said. The offense wasn’t able to put the ball in the end zone, but Alexis Vasquez was able to kick a short field goal. There were plays made by the defense as well. Quarterback Kierston Harvey, who is slated to be the starter as of right now, was intercepted by a member of the defense. Obviously, there was hard hitting and tackling on both sides.  Willoughby was able to move the offense and threw a touchdown pass to Hasim Haughbook. Harvey came back in and led the offense down inside the blue team’s 40-yard line when he completed a long pass to Sam Crumbly.

There was no score keeping. The emphasis was on executing the offensive and defensive plays in a game atmosphere. There were officials to throw flags for off sides, false starts, and other penalties. 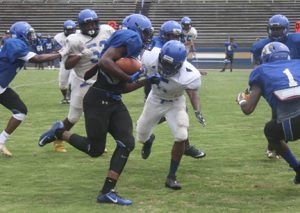 Defensive Back Henry Wilson intercepts Kierston Harvey’s pass and ran it back about 15 yards before being run out of bounds by a host of defenders.
Photo by Ken Gustafson

As the scrimmage wore on, Kierston Harvey was able to showcase his throwing and scrambling ability. The scrimmage was something that he, along with the rest of the Panthers, really needed. “We really get to see all the players come out and play in some actual game action and see how they perform. Hopefully, we’ll get to see some of our key players pop out today,” Harvey said. 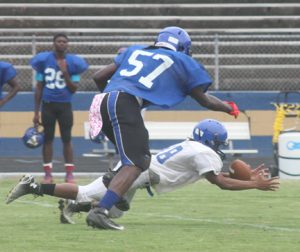 Later during the scrimmage, the offense had the ball at their own 20-yard line. Harvey was able to find Crumbly, who ran it 80 yards for a touchdown.

Throughout the scrimmage, there were nice catches made by wide receivers, good tackles made by defensive lineman and linebackers, and the quarterbacks made some good throws and showed their scrambling ability. 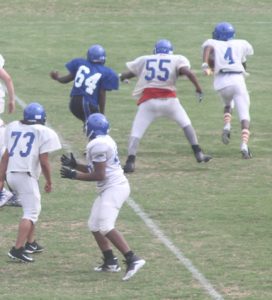 Defensive Back Demetrius Bridges also recovered a fumble and scored a touchdown. There was no winner on the scoreboard, but every player and coach was a winner because they were able to improve on the things that they need to do to win by the time Fall comes around. 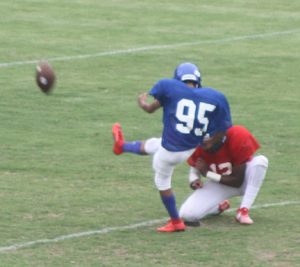 While he would have liked to have seen the team not commit as many penalties as they did, head coach Larry Harold was pleased with the overall effort. “We still have a lot of work to do. There were too many penalties for my liking,” Harold said. “We wanted to come out here today before our scrimmage next week to get the kinks out. You could tell that some of the kids were nervous. Overall, it was a good effort on both sides of the ball. On defense, we got some good stops. The offense made some big plays…just want to be able to run the ball more consistently and just keep getting better every day.”

The Panthers will host a scrimmage on Friday night, May 11, against Southwest Macon at 7 p.m.