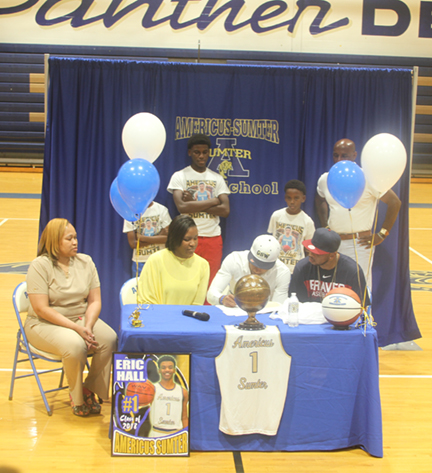 “First off, I’d like to thank God. I’d like to thank my parents. Without them, I wouldn’t be where I am today.” Hall told the crowd assembled. “I want to thank the fans, my coaches, Coach Hoffpauir for believing in me since I was a freshman. I want to thank my brothers. There part of the reason I do what I do.” With that, Hall signed on the dotted line to continue his education and basketball career at GSW. 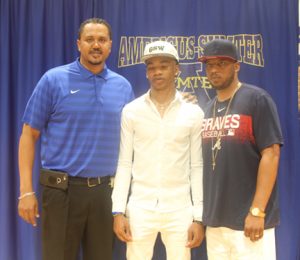 Before Hall made his remarks and signed his letter of intent. ASH Principal Kimothy Hadley invited Hall’s parents and siblings to come down and sit at the table with him. Hadley then made his remarks. “We are very proud of him and we know that he is going to do an awesome job at the next level,” Hadley said. “He’s a hard worker. We know that he has that continued growth when he needs to work on something to enhance those skills, because college, at all levels, whether its football, basketball, baseball, track, it doesn’t matter what level. You must continue to work hard.”

With that, Hadley turned the microphone over to Boys Varsity Basketball Coach Michael Hoffpauir, who was named the Coach of the Year for GHSA Class AAAA. “Eric Hall has been with me for four years. He’s been playing as a freshman,” Hoffpauir said. “Today is his day. He’s earned this right to go on to the next level. Of course, it’s not easy getting to the next level. Everyone has hoop dreams of playing college ball, and hopefully going further, but it’s not an easy road. He put in the time. He put in the hard work and achieved part of his dream.” 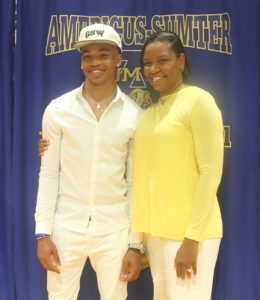 With that, Hoffpauir began to read off the accolades that Hall earned throughout his high school career: two-time All-Region, First Team All-Region. “This year, he is an Atlanta Journal Constitution All-State player, which is pretty big for Class AAAA,” Hoffpauir told the crowd. Hoffpauir went on to say that Hall garnered Georgia Athletic Coaches Association (GACA) All-State honors. “This year, he amassed, for his career at Americus-Sumter, over 1,00 points, which is big, so he’s a part of the 1,000-point club,” Hoffpauir said. With that, the crowd cheered. Hoffpauir went on to say that during Hall’s career at Americus-Sumter, the Panthers went 90-26. “That averages out to 22 wins for all my senior that are a part of this program.” Hoffpauir said. Hall was also named to the Americus Times-Recorder First Team All-Area Team. 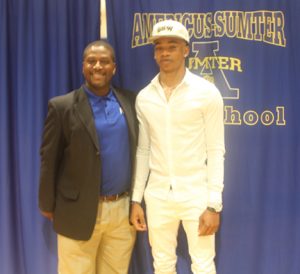 Hall will be majoring in Biology, but at this time, is undecided as to what he would like to do after graduation. Hall said that he wants to major in Biology because since he was a child, he’s always been fascinated about wildlife. As far as basketball is concerned, Hall said that GSW Head Coach Ben Hicks would like to use Hall as a point guard, but would like for Hall to sit behind their senior point guard and learn the college game from him. “They have a senior point guard now. He (Coach Hicks) wants me to come in and learn the game from him, and next year, I can be in the midst of everything,” Hall said.

Both his mother, Aisha Evans, and his father, Eric Hall Sr., saw the potential Hall had at an early age. “He’s played basketball since he was five,” Aisha Evans said. “He started out playing rec. I really knew that he had some talent. By the time he got to middle school, I could definitely tell that he was going to be a good basketball player.”  His father, Eric Hall sr., also noticed his son’s potential. “I knew early in his age, around five or six. He was always dedicated to the sport. He loved the sport ever since he started dribbling the ball.” Eric Hall Sr. said.

Hall said that if he were stranded on an island and was only allowed to have three things, they would be a map, a basketball and water. As far as his favorite movies are concerned, Hall said that Fast and Furious was always one of his favorites, along with Jurassic Park and Transformers.