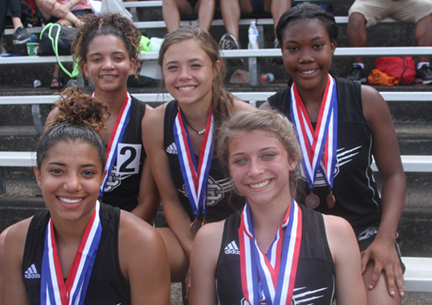 ALBANY – The Schley County boys and girls track and field teams put up strong numbers on Friday, May 11 and Saturday, May 12 at the GHSA Class A Public State Track & Field Meet at Hugh Mills Stadium in Albany. One athlete from Furlow Charter also excelled in the state meet. 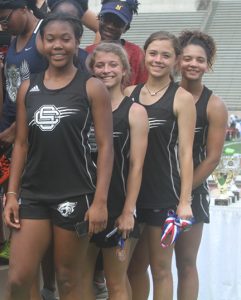 front to back: Dasani Minter, Alexis Bradshaw, Carman Phillips and Tamia Kelley on the podium after finishing in eighth place in the Girls 4×400 Meter Relay.
Photo by Ken Gustafson

The Schley County Girls finished over all in 10th place with 21 points, two points behind ninth-place finishers McIntosh County Academy (23 points). The boys team finished in ninth place overall with 26 points, but just missed finishing in eighth place by one point. Elite Scholars finished in eighth place with 27 points. “I was very proud the boys, we finished ninth out of 66 teams,” Schley County boys coach Scott Burgess said. 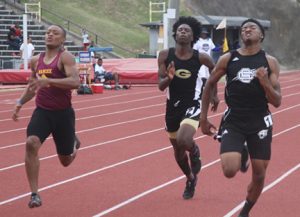 The 95-degree heat, especially on Saturday, was a big factor in the running events for both teams, as well as the other schools involved. “It’s been very hot. I think it kind of took a toll on us in the end,” Schley County girls coach Jim McFather said. “We pushed hard, but I think it sapped some of our girls. We had some great efforts. We just couldn’t quite get over the hump with the heat, but it was a good showing. We get these girls back, so we’re looking forward to next year.”

On Saturday, Schley County’s Dasani Minter finished on the podium in seventh place in the finals of the Girls 100 Meter Dash in a time of 12.69. Minter said that the heat didn’t affect her, but she believes she can get better at the event. “I just want to work harder to get better at the 100,” Minter said. As far as what she needs to do to earn a higher placing in the event, Minter believes that there are a few things she needs to work on. “I think I need to run more in the 100. I need to practice coming out of the block and get better,” Minter said. 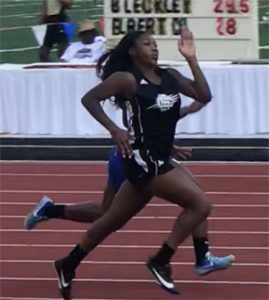 Minter also competed in the Girls 200 Meter Dash, but unfortunately, was disqualified due to taking off before the gun sounded. “I just flinched a little bit and he (the race starter) said I got disqualified,” Minter said. “I jumped before he fired the gun.”

In the finals of the Girls 400 Meter Dash, Alexis Bradshaw of Schley County finished in eighth place with a time of 1:09.18, but good enough to be on the podium. However, Bradshaw passed out after the race due to the heat, and her teammate, Carman Phillips, represented Bradshaw on the podium for her. “It was hot and, I don’t know. I was running pretty fast,” Bradshaw said. “I just need to work on getting faster.” Bradshaw was able to regain her strength to continue in her other events. 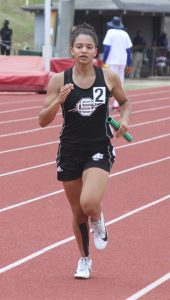 In the finals of the Girls 100 Meter Hurdles, the Lady Wildcats’ Nyiah Kelley finished on the podium in sixth place with a time of 17.84, 40 seconds behind fifth-place finisher SyNarea Newkirk of Montgomery County. Kelley finished in fifth place in the Girls 300 Meter Hurdles in a time of 51.29. “I’ve got to work on my start because I got a slow start,” Kelley said. “It was hard competition.” Kelley went on to say that the heat was a factor in the beginning of the race. 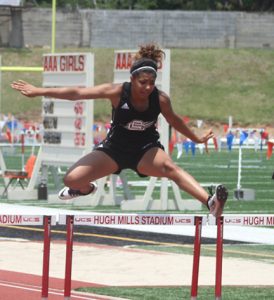 Nyiah Kelley running the 300 Meter hurdles. She finished in fifth place with a time of 51.29.
Photo by Ken Gustafson

In the Girls 4×100 Meter Relay, the Schley County team of Tamia Kelley, Nyiah Kelley, Dasani Minter and Alexis Bradshaw finished in fifth place with a time of 51.36. “I think I need to work on the hand offs a little better and taking off faster, but I think I did pretty good for that race,” Tamia Kelley said. 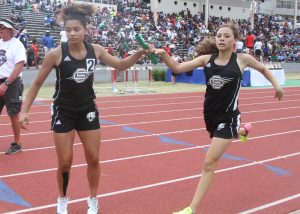 Carman Phillips hands the baton off to Tamia Kelley in the Girls 4×400 Meter Relay.
Photo by Ken Gustafson

On Friday, May 11, the finals of the Class A Public Girls Long Jump took place. Dasani Minter was hoping to make it to the podium in the event. However, Minter just missed it by 9.25 inches. Minter finished in ninth place with her best jump being 15-00.00. Erien Jones of Greene County took the eighth spot with her best jump of 15-09.25. In the Girls Triple Jump competition, also held on Friday, Schley County’s Carman Philips was able to get on the podium, finishing in eighth place with a jump of 32-08.25. “I just need to get my steps right. That’s the key to better jumps,” Phillips said. “I used the whole board to get it. I need to get more up in the air to get it.” Just before one of her jumps (each contestant gets six jumps), there was a delay because some people were in the press box at the east end of Hugh Mills Stadium. 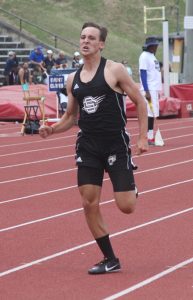 Schley County’s Noah Hammons running in the finals of the Boys 800 Meters.
Photo by Ken Gustafson

The triple Jump competition was taking place at that end of the stadium. Meet officials stopped the contest to yell for those people to leave the press box on that end. This delay took about three minutes or so. According to Phillips, this was a distraction. “It got my mind off the meet thing a little bit,” Phillips said. Nevertheless, Phillips turned in an excellent showing, making it on to the podium in the competition.

In the Girls 1600 Meter Run, Philips finished in fourth place with a time of 5:57.06, tying her best time. “I ran the first two laps too fast,” Phillips said. “That messed up my time. I could have gotten better, but I still finished good with the heat and stuff. It was 95 degrees.” Maya Wynn of Furlow Charter, their only athlete to compete in the state meet, male or female, finished in fifth place place with a time of 6:12.69. “It’s great running against all these great runners, but form really does make a difference,” Wynn said. Wynn also added that her diet really contributed to her success on the track. 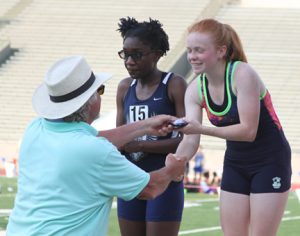 Furlow Charter’s Maya Wynn receives her award for finishing fifth in the finals of the Girls 1600 Meters.
Photo by Ken Gustafson

Wynn finished third in the state in the GHSA Class A Public Cross Country championships last Fall. According to her coach, John Daughty, Wynn is one of the most gifted and hardest-working athletes he’s ever coached. “She’s got the heart of a lion,” Daughty said. “She is a gifted athlete and does great work in the classroom.” Wynn currently has a GPA of 4.0. In addition to her success in the Girls 1600 Meters, Wynn finished second in state in the Girls 3200 Meters with a time of 13:25.21, just 22.73 seconds behind event champion Kate Massey of Commerce (13:02.48). What’s more amazing is that Wynn, a freshman, is able to accomplish this success having asthma. “The more in shape I get, the less it affects me,” Wynn said. “When I’m running, and I feel like I’m having asthma, I just try to stay calm.” 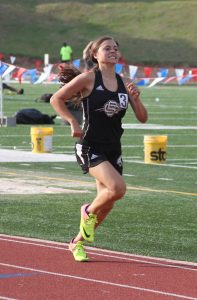 In the Girls 4×400 Meter Relay, the Schley County team made up of Tamia Kelley, Alexis Bradshaw, Dasani Minter and Carman Philips got themselves on the podium by finishing in eighth place with a time of 4:28.94 “I saw that we were behind, but I tried to pick up the pace,” Phillips said. “I tried to catch back up, but it didn’t work out.” Phillips was the third runner in the relay event. Dasani Minter, who ran the first leg of the race, believes that she started out too fast. “I tried to keep my pace with the other girls,” Minter said. Alexis Bradshaw ran the second leg of the 4×400 Meter Relay. “The girl was just too far ahead for me to try to catch up,” Bradshaw said. Tamia Kelley, who ran the anchor leg of the event, said that there were a lot of runners ahead of her. “I tried to catch up, but they were just too far ahead,” Kelley said.

In boys’ action, Schley County’s Jackson Fulks, who finished second in the long jump and fourth in the triple jump, finished in third place in the Boys 200 Meter Dash with a time of 22.26, breaking a school record. Fulks broke the old record of 22.76 set by Dominic Morgan back in 2012. “My strategy going in was to start strong and finish strong,” Fulks said. “I was behind by just a tad bit in third place, but I just need to finish strong next year.” 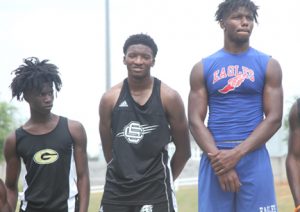 Schley County’s Jackson Fulks on the podium. He finished third in the Boys 200 Meter Dash.
Photo by Ken Gustafson

In the Boys 800 Meter Run, Schley County’s Noah Hammons finished on the podium in fifth place with a time of 2:08.58, just 2.08 seconds behind fourth-place finisher Ian Goodwin of Gordon Lee (2:06.50). “I came in in fifth place in the sectionals with a best time of 2:11,” Hammons said. “I was just trying to set a personal record in this race and finish in the top three, but I’ll be happy as long as I got better than a 2:11. I ran a pretty good race, I think, and got a 2:08, which is my best from last year.” 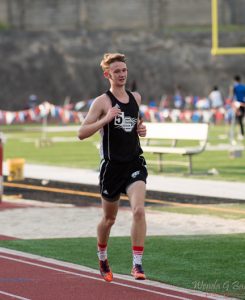 Schley County’s Austin Anthony running in the finals of the Boys 3200 Meters.
Photo by Wenda Bailey

While Austin Anthony didn’t finish on the podium in the finals of the Boys 3200 Meters on Friday, May 11, he still finished in 11th place with a solid time of 11:47.84. Anthony was not far off from making the podium. He finished 14.37 seconds behind eighth-place finisher Trimyna Williams of Terrell County. Anthony struggles with diabetes, but was able to persevere through this grueling event, coupled by the tremendous Albany heat. “I need to work on pacing myself better because those first two laps, I went out at an 800-Meter pace,” Anthony said. “That gradually sapped all my energy out of me in the last part of the race. I went out at a 1:15 pace and came around the second lap at 2:30. With running at a 1:15 pace in this heat, that killed me. I went out there and did what I could do.” 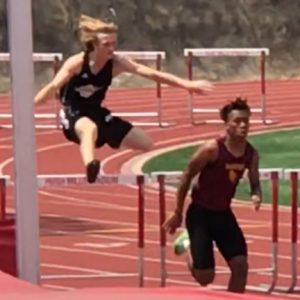 Schley County’s Trent Davis in the finals of the Boys 300 Meter Hurdles. Davis finished on the podium in eighth place.
Photo by Shelley Bishop

On Saturday, May 12, one of the events was the finals of the Boys 300 Meter Hurdles. The Wildcats’ Trent Davis ran the race well enough to make it on to the podium. He finished in eighth place with a time of 44.11. “You just got to give it all you got,” Davis said. “There were two hurdles where I got too high and my ankle slipped one time. I had some good competition. I need to work on my back stretch and keeping my head down low, and get my front foot to the ground faster.” 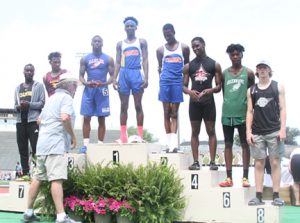 Schley County’s Trent Davis (far right) on the podium after finishing in eighth place in the Boys 300 Meter Hurdles.
Photo by Ken Gustafson

Overall, it was a fine performance for both of the Schley County track and field teams, as well as Furlow Charter’s Maya Wynn. Many of these athletes, including Wynn, will be back next year to try to set higher marks and faster times to improve their teams overall standings at the state meet in 2019.