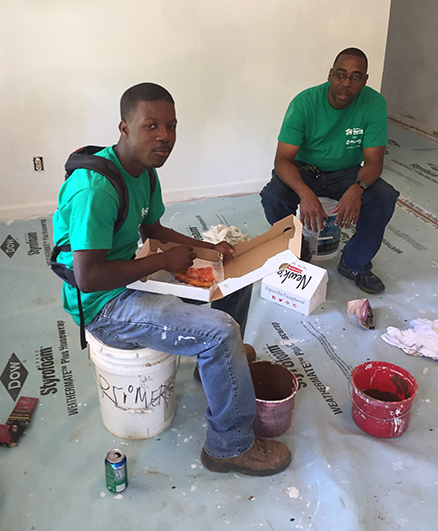 AMERICUS – On Thursday, May 10, in honor of “Hospital Week,” Phoebe Sumter Medical Center partnered with New Horizons Habitat for Humanity in a rehab construction to build homes, communities and hope. However, in a sense, the rehab had already started. On Tuesday, May 8, New Horizons Habitat for Humanity, in conjunction with Phoebe Sumter, gathered to refurbish a Habitat for Humanity home located at 313 Hosanna Circle in Americus.
“It’s Hospital Week, so as part of that, we’re doing a community service project with Habitat to refurbish this home behind us,” Phoebe Sumter CEO Brandi Lunneborg said.
According to New Horizons Habitat for Humanity Executive Director Lori C. Gadson, they were very pleased to be able to partner with Phoebe Sumter in refurbishing the home. “We’re happy to have partnered with Phoebe Sumter and Brandi and her team to rehab this house. This is typically what we do for homeowners, get homes ready so they can move in,” Gadson said. “It’s a good feeling. I’m happy to be here … glad to have participated. I’ve done a little bit of painting. It’s a lot of work, but it’s a lot of fun too.”
For Marcus Johnson, director of Community Relations for Phoebe Sumter, the work they were doing hit home personally. “It feels very good. From a personal standpoint, I grew up in a Habitat home, so I know how important and special it is to be in your own home,” Johnson said. “It’s bringing back a lot of good memories from my childhood. It feels really good to know that we’re going to help somebody realize their dream of home ownership. It just really part of the hospital’s commitment, not only to just serving for healthcare, but just the overall wellness of people.”
Americus Mayor Barry Blount was also there to lend his support in the project, though he wishes he could do more. “I wish I could say I helped them, but I’m just here to give support,” Blount said. “This is just another great partnership between our local Habitat affiliate and Phoebe Sumter in improving our community and providing a home for a family. It’s just another way of partnering with our different interests we have in our community, which makes Americus a very special place.”