Big-hearted ‘Mama Sara’ takes one day at a time 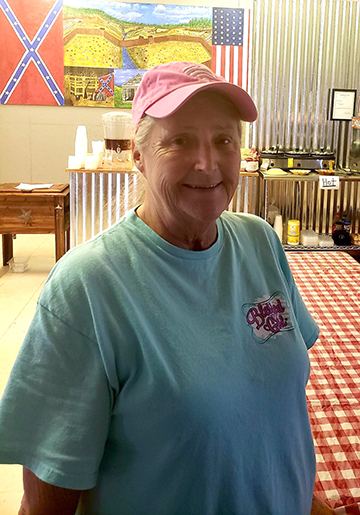 ANDERSONVILLE — The Andersonville General Store located, at 101 W. Church St., has been recently renovated and opened by Sara Day, a woman known by most in the quaint village of Andersonville as “Mama Sara.”
The name befits her, in that she has not only raised three children of her own, Rose Mattair, Johnathan Day and Scott Day, but is also the primary caregiver/mom to three young adults who she calls her own who have myotonic dystrophy, a genetic disorder that causes muscle wasting, trouble relaxing after movement, and weakness. Early signs are muscle weakness in the face, hands, forearms, and feet. The heart, eyes, and other organs may also be affected later in life.
“I fell in love with them during their weekend visits with their father,” Sara Day said, explaining their father is a long-haul truck driver.
Thirteen years have passed since the first day she met the children. Day has meticulously helped in caring for the children, teaching them everyday living skills into adulthood, and recently the mother of the adult children was diagnosed with cancer, and Day and their father were granted guardianship.
According to Day, her days are centered on the children’s schedules. Just a few days ago, the youngest, who is 18, graduated high school. Day said the days of getting up at 4:30 a.m. and making sure children are on the bus safely and waiting in the evening at 6 p.m. for the bus to arrive are over. For Day, a new journey begins with her young adults. Day added that the children’s success through their school years and throughout adulthood will remain her number one priority, as she continues to foster their growth, health and well-being.
Day said each has their unique personality, with the male being totally different in personality than the females. Nora, who is 27, is very vibrant and outgoing. Bonnie, 18, the recent graduate, is very timid and shy, and there is Will, 25, who is best described as, “just Will,” according to Day.
Between Day and her grandson, Mel Mattair, they operate the general store, taking turns as Day adheres to her charges’ schedules. With days filled with grocery shopping, preparing meals, scheduling appointments, laundry and constantly making sure Nora, Bonnie and Will’s daily needs are met, Day runs a pretty tight ship.
Day explained that during the renovation of the store, she was in the process of finishing the kitchen, which would allow her to prepare hot foods such as carry-out chicken and allow for a hot food bar with fresh vegetables; however, the funds to finish the kitchen had recently come to a halt because of a tragic event.
“I was out of town. I went in for a procedure,” she said explaining she received a phone call informing her that her house was on fire.
By the time Day arrived, the house was a total loss. Everyone was safely outside but her grandson’s dog. However, Sumter County Fire & Rescue, which responded to the fire, rescued the dog from the flames, and vigorously revived the dog who suffered from smoke inhalation.
After the fire, Day and her family stayed in a one-room hotel for a week, before acquiring a cabin in Andersonville, which will serve as temporary housing. Day said a good friend, Mary Calhoun, who was a stranger at the time of the fire, reached out with open arms to help find shelter and necessities for her family.
“With the help of my immediate family, Rose Mattair, Mel Mattair, Johnathan Day and Scott Day, Mary, Pastor Jerry Sanders, Mike Messer, Kay Preston, Cynthia Stormcaller, and Teresa Brooks beating down the doors to find help for my family, we can see the light,” Day said referring to all the friends made during her family’s transition and the love and helpful outreach of Andersonville and surrounding communities.
“I know God had His hand in it, making something good out of something bad,” she said, thanking everyone involved who provided beds, linens, food, clothes and monetary needs. Day added a special thanks to a couple, whose names she did not wish to disclose.
Day said she hopes to have a bigger house to rent in a few months, which will serve as housing while her home is being rebuilt.
“I want to thank the American Red Cross, Easter Seals, and local churches for their outreach to my family,” said Day with gratitude.
After all the tragedies of the past few weeks, Day continues to work on her means of making a living, as she makes her way back to the very back of the crisp, clean, freshly renovated store which is decorated with red and white checkered curtains and tablecloths. Day elaborates on the hood and other repairs which are needed in order to serve hot foods.
“We will one day serve hot foods. But until then, we are serving sandwiches such as turkey clubs, BLTs, ham sandwiches, dog pies, sausage dogs and we also have a hot-dog bar,” Day said, as she stood with what most would call the strength, positive attitude and determination of Scarlett O’Hara as she ended her lines in the famous book movie “Gone with the Wind” — “After all tomorrow is another day.”