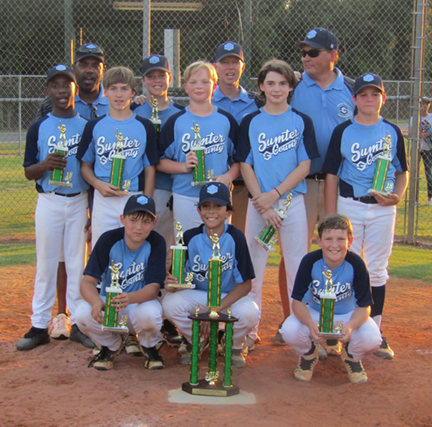 HAWKINSVILLE – Both the 12u and the 8u Sumter County All-Star baseball teams put on an excellent showing at the Hawkinsville Invitational Tournament, which was held Monday through Thursday, June 4-7, at the Hawkinsville Pulaski County Parks and Recreation baseball complex.

The 12u All-Stars capped off the week by winning the tournament. They defeated the Dooly County All-Stars 13-1 in the championship game of that age division.

“I’m very proud of each and every one of them,” Head Coach Philip Exley said. “I’m proud of the way they played. They didn’t take anything for granted. They earned it. We had a slow start…didn’t score anything in the first. We had a huge inning in the second. We broke out with 11 runs and ended up run-ruling them in the fourth. I’m very proud of the team.” Coach Exley went on to say that the overall performance of his team in the tournament was exceptional. 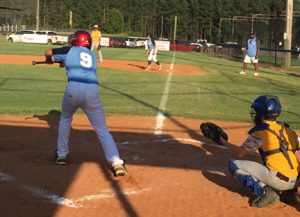 Godwin shows to bunt, but he hit a home run in the second inning as part of an 11-inning barrage of runs for Sumter County.
Photo by Ken Gustafson

Sumter County did indeed score 11 runs in the second inning to seal the victory and the 12u tournament championship. Part of that 11-run barrage was due to home runs by Will Godwin and Travis Pennington. Sumter County went on to score two more runs before run-ruling Dooly County 13-1. 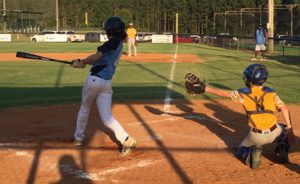 Travis Pennington’s three-run home run was part of an 11-run explosion for the 12u Sumter County All-Stars.
Photo by Ken Gustafson

Starting pitcher Luke Exley was solid on the mound for the boys from Americus, only allowing one run on a few hits. Up next for the 12u Sumter County All-Stars is the Kiwanis Baseball Tournament Friday through Sunday, June 8-10, at the SCPRD baseball complex. Their first game will be on Friday, June 8, at 5 p.m. 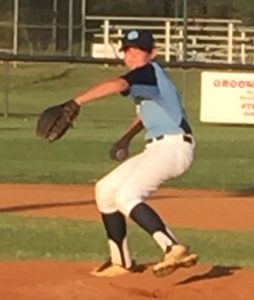 Sumter County starting pitcher Luke Exley had a fine performance on the mound. He gave up one run on just a few hits.
Photo by Ken Gustafson

The 8u Sumter County All-Stars also had a good showing in the 8u division of the Hawkinsville tournament. At this age group, a pitching machine is used and an infielder plays the pitcher’s mound. Though they didn’t win the tournament. They still finished in third place. 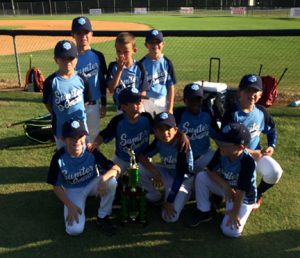 The 8u Sumter County All-Stars began the tournament on Monday, June 4, by beating Dublin 11-9. They then destroyed Crisp County on Tuesday, June 5, by the score of 18-3. However, they ended up on the other end of the spectrum as they got shellacked by Hawkinsville 22-8 on Wednesday, June 6. 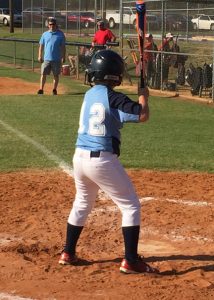 Outfielder Connor Ash at the plate.
Photo by Ken Gustafson

Their final game of the tournament took place on Thursday, June 7 against Dodge County. It was a hard-fought battle between both teams, but an eight-run inning by Dodge County was too much for Sumter County to overcome, and the boys from Americus lost 12-7. Head Coach John Mixon was not able to be at the game, so assistant coach Steve Brock was the skipper Thursday night. “I thought we played good. The boys are a little tired,” Brock said. “We played a lot of baseball in a short time here. I was proud of them. They fought back. We got down and we fought back…got a few extra runs late in the game. We just couldn’t quite get it going.” 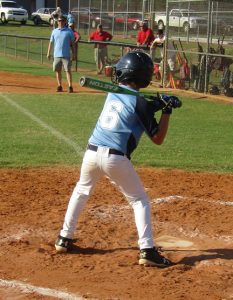 Catcher Max Kelley had at least two hits and drove in an RBI in the 12-7 loss to Dodge County.
Photo by Ken Gustafson 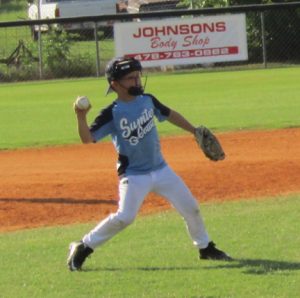 Mason Dowdey playing the Pitcher’s Mound position. He fields a ground ball and is about to throw it to first base.
Photo by Ken Gustafson

For both the 12u and 8u teams, this is all for the love of baseball, but these tournaments are also preparation for the district tournaments, which begin on Saturday, June 23.