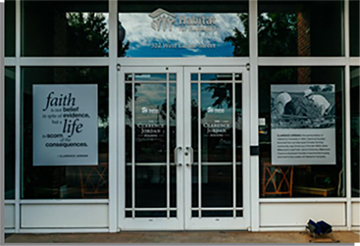 AMERICUS — Members of Habitat for Humanity’s senior leadership team, Habitat employees and community members gathered in Americus recently to formally dedicate Habitat’s operational headquarters building in honor of the organization’s “spiritual father” Clarence Jordan.
“Clarence Jordan’s spiritual teachings and concept of ‘partnership housing’ provided the underpinnings that still guide our work today,” said Jonathan Reckford, CEO of Habitat for Humanity International. “His dedication to his lifelong ministry has inspired all of us at Habitat to continue working toward creating a world where everyone has a safe, decent and affordable place to call home. We are truly honored to continue his legacy by dedicating our operational headquarters in the name of our spiritual father.”
Jordan was a Southern Baptist pastor and farmer from rural Georgia. He dedicated his life and his ministry to advocating for those living in poverty and for equality of all people. In 1942, Jordan established an interracial Christian farming community named Koinonia Farm in which members worked together for the common good and all persons were treated equally. Jordan incorporated his agricultural background to teach local farmers new farming techniques to increase profit and production and help them break the cycle of poverty that affected many families around the community.
Habitat’s founders, Millard and Linda Fuller, visited Koinonia Farm in 1965, and were inspired by the work of the farming community. In 1968, the Fullers partnered with Jordan and his wife Florence to develop a new initiative which focused on low-income people in their community in need of decent and affordable housing. This concept, called “partnership housing,” would later become the core foundation of Habitat’s mission and its work around the world.
One of Habitat for Humanity’s earliest headquarters was in the Clarence Jordan Center on West Church Street, which it is in the process of selling. The organization is now dedicating its Lamar Street headquarters building, formerly known as the Rylander Building, in honor of Jordan.