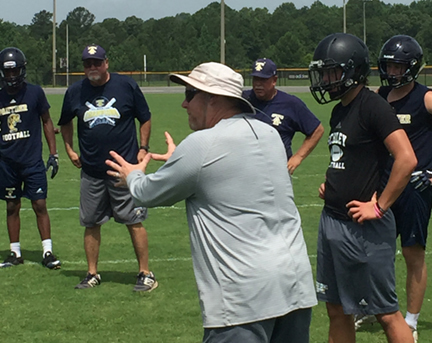 ELLAVILLE – As part of their continuing Summer workouts and preparation for the upcoming 2018 season, the Schley County Football Team held a joint practice with Tiftarea Academy on Thursday, June 21, at Schley County High School.

Schley County running back Tra Sampson running the ball during the joint practice against Tiftarea.
Photo by Ken Gustafson

Tiftarea is coached by Erik Soliday, who is the former coach at Americus-Sumter. Schley County Head Coach Darren Alford was pleased with the overall performance of his team. “I feel like we had a pretty good scrimmage today,” Alford said. “We saw some things we don’t get to see when we practice amongst ourselves. When you get another team in, you always see what you need to work on, and there are some things that we are going to have to get better at.” Alford went on to say that on offense, they missed some blocks, but as far as the seven-on seven drills, Alford felt the offense was open. “We ran some good routes, but we’ve got to do a better job catching the football,” Alford said. “I want to throw the football more this year than last year if I can, but to do that, we’ve got to catch the football. If we don’t catch the football, there’s no reason to throw the football.” 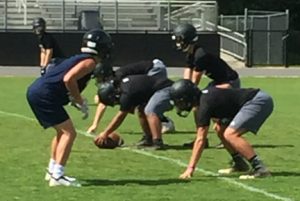 Schley County quarterback Garrett Peavy under center directing the offense during the scrimmage with Tiftarea Academy.
Photo by Ken Gustafson

Both teams squared off against each other in not so much a scrimmage game, but a joint practice. As far as competition for starting jobs and playing time are concerned, it is still open competition at every position, including quarterback. Garrett Peavy, who was the starter a year ago, will be a senior in the Fall. However, Jarrett Long, a rising junior, is providing some stiff competition for Peavy. “Right now, there’s a competition going on at every position,” Alford said. “It’s just too early. We’ve got people who came back from last year who started. Of course, looking into the season as coaches, we look at those guys and say ‘Hey, we think we might have a starter here’, but we’re not going to let anybody just get a position without somebody having to work for a position.” Alford went on to say that both Peavy and Long bring positive things to the table. “Garrett has done a really good job. Jarrett has done a really good job also for us,” Alford said. “Jarrett has come in two times in the last year. We won both of those games. I’m thankful to have two guys that can play the position.”

As far as Peavy is concerned, he doesn’t mind the competition Long is providing. “We’re friends. We don’t think about it that much,” Peavy said. “We compete and whatever happens happens.” 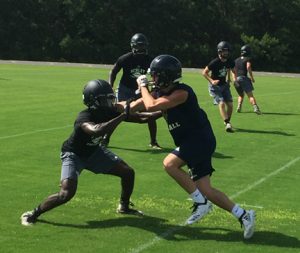 With competition going on at every position, that would include running back as well. Chris McFather is the running backs coach for Schley County. According to him, at least five guys are competing to start. “They’re all open,” McFather said. “It’s up for grabs…whoever is going to be most consistent.” According to McFather, five of those running backs include Jakim Hart, Tra Sampson, Landon Dailey, Will Hardin, and Qontavious Clark.

As far as the joint practice with Tiftarea and the overall team performance, offensive lineman Archer Hathaway is pleased with how the team is progressing. “We’re really getting better. We’re working on our craft…trying to get the wide receivers to get the routes right,” Hathaway said. “We’re just putting in work in the Summer to get ready for the season.”

The Wildcats open the season with a home game against Marion County on Friday, August 17, at 7:30 p.m.

Westbrook’s free throw gives the 14u Cavaliers a thrilling…