Tennis for a Cause: The Americus Tennis Open Benefit raises money for local resident’s surgery 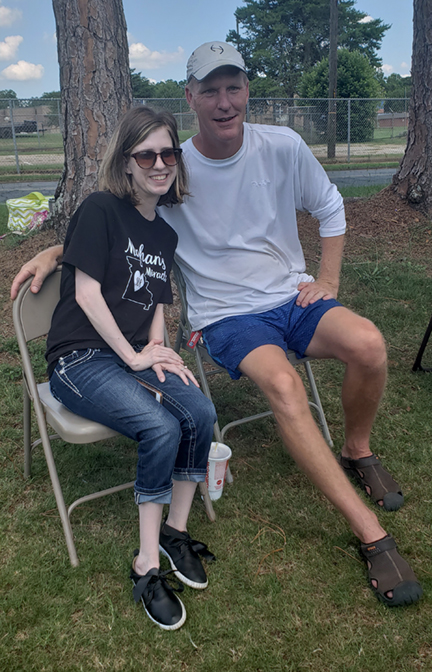 AMERICUS – Stephen Pinnell, who is the Customer Service Manager for the Clinic Drug Store here in Americus, has put on tennis tournaments for several years now. However, starting this year, he’s putting on a tennis tournament to help someone in need.

It’s the inaugural Americus Tennis Open Benefit. It was put on by Pinnell to help raise money for Megan Edwards, a local resident who is having brain surgery to either repair or replace a shunt in her brain. 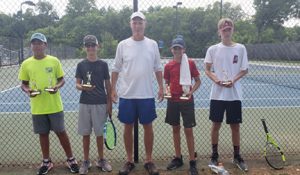 The tournament was held this past Friday through Sunday, June 22-24, at the Americus-Sumter High School Tennis Complex. The amount of money raised from the tournament was $2,000 for Edwards’ surgery, which will take place in Missouri on Friday, July 13.

“Bill and I had talked for about a year on starting a tournament, but I haven’t had the inner strength to do this type of challenge since my son passed away four years ago,” Pinnell said. “This is my first tournament since then. The Lord was putting on my heart the fact that I needed to get out there when Mrs. Mary Williamson Duke contacted me about her granddaughter needing surgery.” Williamson’s granddaughter is Megan Edwards. 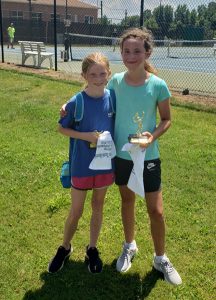 Without hesitation, Pinnell knew this was confirmation from God that this is what he was supposed to do. “The heat was brutal, but there were no injuries,” Pinnell said. “My favorite thing was playing in a tournament with my wife for her first ever tournament. We lost, but we had a blast.”

Pinnell went on to say that another highlight for him was seeing coach Josh Hicks win his first game ever. Pinnell was also pleased with the performances of the players in the youth divisions. For Pinnell, however, the most important thing is growing this tournament for the purpose of supporting other noble causes that come about. “We hope to continue and grow this tournament and pray for other good causes to present themselves,” Pinnell said. 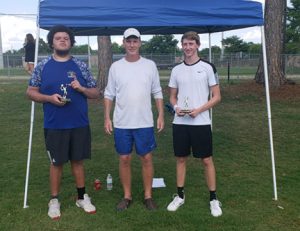 In the Men’s Open A competition, Wes Sadler defeated Rocky Huffstetler to win that division. Aaron John Nduayezwi defeated Jeremy Ledger to win the Men’s Open B division. In Girls 12 & Under Singles, Addie Drinnon defeated Harper Kate Clenney to become champion. In the Boys’ 18 & Under Singles Division, Nduayezwi won his second title by defeating Sam Copeland. In the Boys 15 & Under Singles Division, Isaac Harper defeated Riley Herron to win the championship of that division. In the Boys 15 & Under doubles competition, Harper teamed up with Riley Herron, and they defeated the duo of Aaron Sandwich and Mitch Herron, Riley’s twin brother.

As fun and enjoyable as the tournament was for all who participated, the most important thing is that money was raised for an extremely important cause. Megan Edwards will be able to have the surgery she desperately needs.