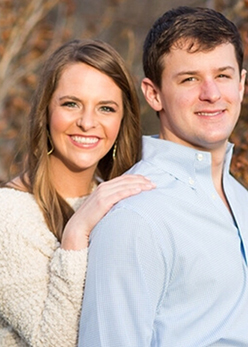 Bobby and Lynn Hancock-Harris of Americus announce the engagement of their daughter, Rebecca Tatum Whitley of Chattanooga, to Matthew Douglas Sprinkle of Chattanooga, son of Stephen and Linda Sprinkle of Marietta.
The bride-elect is the granddaughter of Mary Louise Hancock and the late Larry Hancock of Americus, Mike and Brenda Whitley of Cobb, Susan and Charles Davis of Albany, and Margaret Harris and the late Bobby Gene Harris of Forest Park. She is a 2010 graduate of Southland Academy and in 2014, graduated from Georgia Southwestern State University with a degree in marketing. She is employed as a college recruiter at Shaw Industries in Dalton.
The future groom is the grandson of Walter and Bess Sprinkle of Sandy Springs, Grace Beaullieu of Alpharetta, and the late Frank and Anne Beaullieu. He graduated from Holy Innocents’ Episcopal School in 2009, and went on to Auburn University where he graduated in 2015 with a degree in mechanical engineering. He is employed as a senior process engineer at Shaw Industries in Dalton.
A fall wedding is planned for October in Chattanooga.