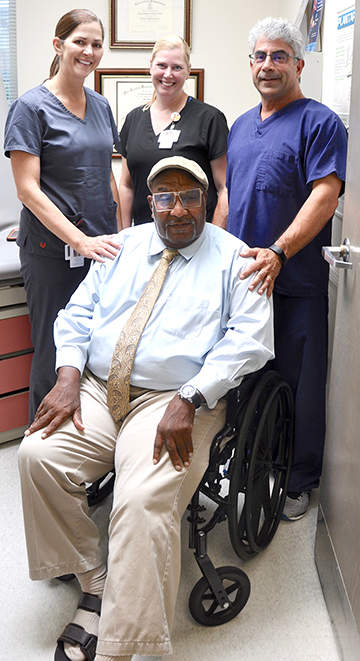 Leonard Tyson, seated, is shown with his podiatrist, Dr. Leonard LaRussa at Family Foot and Ankle in Americus, and two office staffers.

AMERICUS — As many around Americus who are familiar with Leonard Tyson know, he is man to out one in the mind of the old phrase, “You can’t keep a good man down.” Well, Tyson has proved to be one of these men.
Tyson, 59, an Americus native, the youngest child of Mary and Leonard Tyson Sr., was born legally blind and found he was a diabetic at age 36.
“I was very near-sighted and my parents would not let me go outside. My aunt, Rosa Brantley, would play the piano. So, I started playing piano with her. I was three years old,” he said, explaining that he went on to start his education at the Macon School for the Blind in 1965, at the age of five and then attended Georgia Southwestern College as a music major.
Tyson is known around Americus as a man with an active lifestyle performing his keyboard skills/talents as deejay for private parties, and has also played in various bands over the years, from the “Little Mickey and the Sticks” to “Silky Smooth.” He also toured with the S.O.S. Band of Atlanta.
However, Tyson, recently had a procedure on his foot which cured a case of gangrene that had jeopardized his music career.
Tyson said his condition was first discovered by another local physician, after many times receiving treatment for pain in his foot.
“I went to the hospital and they couldn’t find nothing. So, I finally went to a doctor,” Tyson said, explaining that the first doctor eventually recommended surgery to remove the gangrene. However, the gangrene reoccurred and Tyson started receiving treatment from Dr. Leonard LaRussa, a podiatrist, at the Family Foot and Ankle Clinic in Americus.
Tyson said he probably wasn’t the best patient to treat, but LaRussa was committed to his treatments and his methods and the final outcome was successful.
“I am not the kind to lay down. I have to keep active and moving,” Tyson said. He said LaRussa was very strict in his methods and treatments and could not stress enough that his recovery depended on Tyson not applying pressure to the wound.
“But, like I said, I am not one to lay down,” Tyson said, laughing.
According to LaRussa, Tyson had received various treatments over the years from other clinics, including the Phoebe Wound Clinic.
“It is all about limb salvage, “LaRussa said, explaining a new treatment which consists of a course of total contact casting and skin grafting before the wound is totally healed. LaRussa said the treatment he used was a relatively new procedure called Cellu Tome skin graft. It is a type of epidermal harvesting system which allows clinicians to harvest healthy epidermal skin tissue with less pain and accelerated recovery compared to older procedures.
According to LaRussa, the new harvesting concept is faster as far as recovery time and less painful for the donor.
“We took tiny little grafts from the thigh,” LaRussa said, describing the procedure and the ultimate results of the sealing off of the wound.
“His wound has healed; it finally is closed,” LaRussa said with confidence and excitement, adding that Tyson has been prescribed therapeutic shoes, customized to accommodate his new foot.
“I have my foot now,” said Tyson with a smile. He said he can get back to his music and can’t wait to go on a trip to Six Flags over Georgia and ride the roller coasters.
“I haven’t been to Six Flags in five years,” he said. “I love roller coasters!”