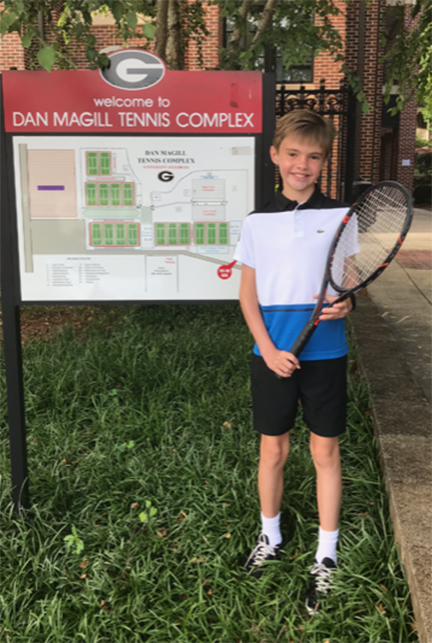 11-year-old tennis player Bennett Bowen Minor with his tennis racket at the Dan Magill Tennis Complex at the University of Georgia. Photo by Claudia Brown

SANTA ROSA BEACH, FL – Eleven-year-old Bennett Bowen Minor has dreams of playing tennis at the University of Georgia. Minor, who is originally from Americus, now lives in Santa Rosa Beach, Florida. According to his mother, Claudia Bowen, Bennett plays on the Emerald Coast Middle School Tennis Team. Another interesting Americus connection is that Ellen Adkins, who teaches Science at Emerald Coast Middle School, is also from Americus and founded the Clinic Drug Store.

“Bennett also was his Sixth-Grade Class Representative and is in the Junior Beta Club,” Bowen said. “Bennett’s Dad, Joe Minor, and paternal relatives still reside in Americus and Ellaville, where they farm.”

Bowen went on to say that Bennett’s maternal grandparents, Randy and Joyce Bowen, travel back and forth between Americus and Florida. “They still subscribe to the ATR and get it mailed to Florida,” Bowen said. “Bennett takes lessons at both San Destin Resort and Top’s Resort in Miramar Beach.”

According to Bowen, Bennett spends most of his summers in Americus, and plays in tournaments throughout Southwest Georgia whenever he can. He has played at Doublegate in Albany and Glen Arden Country Club in Thomasville.

According to Bowen, Bennett’s three sisters have all attended the University of Georgia, and Bennett hopes to go there some day and play tennis for the Bulldogs on a tennis scholarship.  For the past three summers, Bennett has attended the Manuel Diaz Bulldogs Tennis Camp.

“Every time we go to a tennis camp or a tournament, we try to do something cultural,” Bowen said. “In Thomasville, we went to the Rose Festival and visited Sweet Grass Dairy where goat cheese is made,” Bowen said. Bowen went on to say that on their way back from Athens, they try to stop at historic sites such as Rock Eagle and the Uncle Remus Museum.

Bennett Bowen Minor has been playing tennis since he was four. Claudia Bowen says that she and Bennett like Roger Federer because he has such good manners and is a class act, as well as being an outstanding player. Bowen recalls a time when she was up at 2 a.m. watching the Australian Open in 2014. “Federer saved our lives because he happened to be playing at 2 a.m. in the Australian Open semifinal in 2014,” she said. “I had to work the next day and Bennett had school, but I set my alarm to get up and watch the tournament anyway.” Bowen went on to say that there was an out-of-control fire behind their home which would have killed them and their neighbors if she hadn’t been up at 2 a.m. to watch Federer. “I saw a 40-foot wall of flames approaching our home,” Bowen said. “Fortunately, the fire department is near our home, so all ended well. We will be FED fans forever, even if he retires.”

Bennett Bowen Minor prefers to play in Southwest Georgia and North Florida. According to Bowen, the furthest south he has played in a tournament was in Orlando. “He plays in Southwest Georgia whenever he can, even though he does not get USTA credit from Florida,” Bowen said. “The people are nicer and the competition is not as cut throat as, say, in the Miami area.”

Hopefully, Bennett Bowen Minor will continue his progress in the development of his game and will one day realize his dream of playing tennis for the red and black.