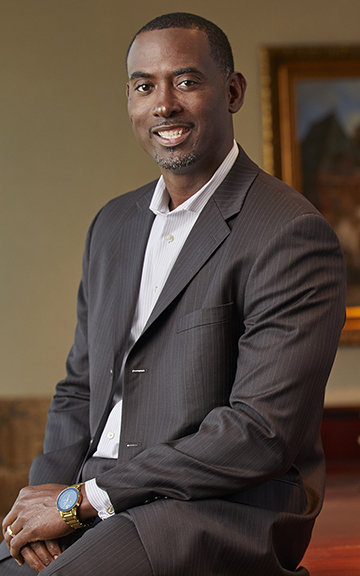 Doug Moses has been elected chairman of the Georgia Southwestern Foundation Board of Trustees.

AMERICUS — The Georgia Southwestern Foundation Board of Trustees recently elected Douglas “Doug” Moses as chairman, effective July 1, at its spring 2018 board meeting. Moses will serve a two-year term.
Moses earned his bachelor’s in accounting from Georgia Southwestern State University (GSW) in 1997, and a master’s in business administration with an emphasis in accounting from Georgia Southern University in 1999. He previously served as president of the GSW Alumni Association and as a member and treasurer of the GSW Foundation Board of Trustees.
Originally from Ocilla, Moses has been in Macon and Atlanta with the accounting firm Mauldin & Jenkins, LLC for the past 19 years and was named a partner at the firm in 2009. He specializes in audits of governmental entities, primarily cities, counties, school districts, state agencies and special purpose entities.
“I look forward to Doug’s leadership and commitment to the Foundation,” said Foundation Executive Director Reda Rowell. “We have adopted the University’s strategic vision and embarked on an aggressive journey to secure funding for capital improvement goals — the Griffin Bell Golf and Conference Center, athletics facilities, and classroom and lab renovations chief among them. I am confident that our vision and goals will become realized under Doug’s guidance,” adds Rowell.
“I’m excited to serve as the chairperson of the Foundation and the opportunity to continue the strong momentum in the many initiatives that have been set forward,” said Moses. “There will be numerous visible changes the Foundation is doing in support of the University. GSW and the Board of Trustees will need the continued support (and even more) from the community leaders, GSW alumni, and university friends in taking GSW to the next level.”
At the conclusion of the meeting, Moses thanked outgoing Chairman Will Peterson for his work with the Foundation and highlighted accomplishments during Peterson’s tenure. These include: providing, for the first time, over $1 million in student scholarships in one academic year, increasing the number of gifts and bequests, organizing an agri-business roundtable discussion and maximizing investment earnings.
Moses and his wife Yolanda Sims Moses (‘01) live in Locust Grove with their two daughters, Camille and Gabrielle.
Through fundraising and prudent fiscal management of assets and gift accounts, the GSW Foundation provides resources to Georgia Southwestern State University. The GSW Foundation is dedicated to the advancement of Georgia Southwestern.