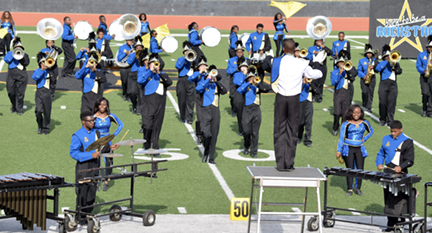 The Americus-Sumter High School Marching Band will be performing music from the decade of the 90s at halftime of the ASH football games during the 2018 season. Submitted photo

In this case, it’s the Americus-Sumter High School Marching Band, under the direction of Deborah Hughes.

“The Americus-Sumter high school band is excited for this upcoming marching season and has been preparing for it to be a fantastic season,” Hughes said.  Hughes went on to say that the band’s drum major, senior Nicole Ash, attended the Troy University Leadership Camp back in June. In addition to being the drum major for the band, Ash also plays the flute. 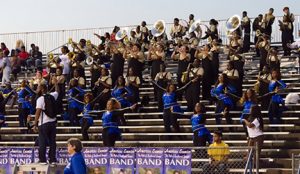 According to Hughes, the Dance Line, the Royal Diamonds, along with the percussion line, had mini camps at the school back in June as well. Hughes also went on to say that members of the band’s leadership are attending a leadership camp in Valdosta this week where they will be learning how to be effective leaders for the band program, as well as developing their leadership skills on and off the field.

As far as what the band will be playing at halftime of the ASH football games, Hughes said that this year, their show will include music from the 90s. “It will be a medley of different pop songs from the decade of the 90s,” Hughes said.

The ASH marching band will begin band camp Monday through Thursday, July 16-19, from 8 a.m. to 5 p.m. They will also have another band camp Monday through Thursday, July 23-26, also from 8 a.m. to 5 p.m. At these camps, they will be learning their marching fundamentals, marching drill and music for the halftime and competition show, as well as music for when they play in the stands. “Our marching band is our most visible part of our band program because they will perform at all of the football games, as well as travel to marching competitions throughout the fall season,” Hughes said. Hughes went on to say that she is still finalizing the schedule for the band, but the ASH marching band will definitely be competing in two marching competitions in Southwest Georgia. Hughes also said that the band will be performing in at least two parades this season.