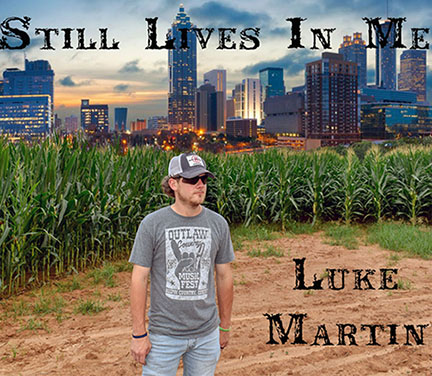 ELLAVILLE — Luke Martin, a musician from Ellaville, has met with success since the Times-Recorder first interviewed him four years ago. Since that time, since the release of his first EP (extended play record), “things have really progressed,” he said.
Martin has since become a father “to an amazing little girl” in March 2015, and he got married May 2016. “They are my world and my biggest supporters,” he said of his daughter and wife. “They tolerate me being gone the weekends chasing my dream and I can’t thank them enough for that.”
In 2015, Martin signed a management contract with EGA productions of Albany. Steve Owens, the founder, and Martin’s manager, means a lot to Martin. Owens has been “a real blessing to me and our relationship goes deeper than just artist to manager. It’s more like brothers because we both have goals for each other and we help each other achieve those goals.”
Martin said Owens is the “one behind the scenes working his butt off to make sure The LMNATION keeps rolling strong.”
Martin has spent the last four years honing his craft as a writer and performer. “After releasing my first album, I learned that I needed to prepare a little before I did that again and get my live shows where they needed to be and have a great team in place to take the music out to the right places,” he said.
The young artist said a song he had written six years ago has stayed in his mind and now he knows what the song means, as in the lyrics fit him personally more now than they did when it was first written. “I guess the good Lord knew that, and He knew now was the right time to let the world hear it, so He blessed me with the right opportunity to do just that,” Martin said. “That’s where we are right now; everything just feels right. The band, the music I’m writing, the people I’m doing it with, just everything feels right.”
The song, “Still Lives in Me,” was released Friday to all online stores. Martin played an acoustic show Friday night at Wolf Creek Plantation to start the single release weekend. Tonight, Saturday, July 21, he’s playing a full band release party at what his calls their home venue, Cypress Grill in Cordele.
Martin said they have about 15 songs they’re working with and this single is “testing the waters to see if the direction we are going with the music will work in the market of today,” he said. They’re talking about another EP or a full-length album as the next step.
Tyler Hammond of Warner Robins is the producer on Martin’s just released single. “He’s another country artist, a dang good one at that, but he’s also one of the first artists I met six years ago and he’s become one of my best friends over the years. He did an awesome job on this song,” he said.

Throughout the past year, Luke Martin has become well known in the South Georgia area for his “Garth Brooks” style performance and his “Kid Rock” country sound. The band truly lives up to its slogan Country With An Attitude.
Steve Owens, CEO of EGA Productions said, “Luke is the next big hit from Georgia. He has the potential to be one of the greatest performers of the state of Georgia. His tenacity and drive to success is one that should be in all performers. He is not just a regular singer … he is a true artist!”
Martin continues to feel thankful for his journey. “Thanks to my wife Brittany and little girl Rylan, I can do what I love,” he said. “My mom Paula and dad Kevin are always there for me. My band, you guys rock and are the reason people come to a Luke Martin show … and last but certainly not least I’m thankful for my fans. Y’all are the reason we get on stage to play our music. One thing I always try to make known is it’s always about the music. All I am is a pathway for the songs to reach the ones who need it the most. That’s what being a songwriter is all about.”