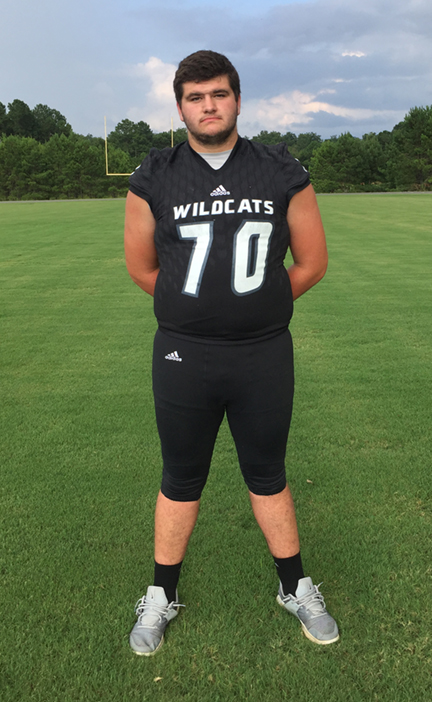 Junior left tackle Archer Hathaway is a co-captain of the Schley County HS football team. He is already being recruited by several colleges. Photo by Ken Gustafson

ELLAVILLE – Schley County left tackle Archer Hathaway will be a junior this year and is a co-captain for the football team. He is pretty much a “born leader”, having been a leader on his ninth grade and middle school teams. “I’ve always been one of the ones leading everybody and helping everybody get better…just moving everybody towards what we’re working for.”

As far as what his favorite position is concerned, Hathaway has always been happy being a lineman. “I’ve always been a lineman just because I’ve been bigger than everybody else. I like left tackle,” Hathaway said. As a rising junior, Hathaway has already had many fond memories in high school, but one particular event stands out. It’s his greatest memory as a Wildcat so far. “We were playing Marion County last year on this field (Schley County). We beat them. I can’t remember what the score was, but we beat them for the first time in a while,” Hathaway said. “That was really special to share that with my teammates and to be able to enjoy that with them.”

In addition to playing football, Hathaway plays on the Schley County basketball team and is also a member of the track & field team. “Football is my main sports, but I play basketball to keep in shape. I do track to help the team and help the school,” Hathaway said.

As far as his favorite hobbies outside of sports, Hathaway likes to hang out with his friends, go swimming, ride four-wheelers and playing pick-up basketball at his house. As far as his favorite academic subject to study, Hathaway said that he likes science. His mother, Heather Hathaway, teaches science at the high school. “I really enjoy doing that because she helps me with that,” Hathaway said. “I was brought up to be better in that subject than any other one. I really enjoy science more than any of the other ones.”

Every high school student-athlete has their favorite food to eat. To give one an idea of Hathaway’s favorite food, one might find him eating at a Buffalo Wild Wings restaurant, or local places, such as JJ’s Wings & Things or Wood’s Swinging Wings. “I really like buffalo wings. I don’t know why. I’ve always liked them since I was little. That’s one of my favorite meals to eat,” Hathaway said.

After college, Hathaway plans to follow in his parents’ footsteps. “Both my parents have been teachers and my Dad is a Superintendent. I’m really interested in going into education and becoming a teacher and a coach,” Hathaway said. “

Hathaway has a message for young kids who aspire to play at the high school level and beyond. “When you’re little, football is all fun. You need to keep having fun playing it,” Hathaway said. “You need to keep having fun playing football through your middle school, high school and hopefully, college career. Just keep working hard and don’t give up. Don’t think about it as work. Think about it as hanging out with your friends and having fun.”