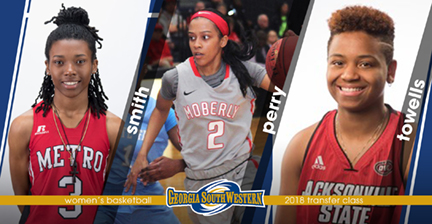 AMERICUS – The Georgia Southwestern State University Women’s Basketball Team added three transfers to their roster for the 2018-19 season. The three new players are Kayla Smith, Brianna Perry and Morgan Towells. Smith is a guard/forward who is transferring into GSW from Atlanta Metropolitan College. During her time at AMC, Smith made it on to the Georgia Collegiate Athletic Conference All-Region Team for the 2018 season. She averaged 11.6 points per game, 10 rebounds per game and three assists per game while shooting 40 percent from the field.

According to GSW Head Coach Kelly Britsky, Smith is a super athletic guard/forward player. ”She is great in transition and very active on the boards with her leaping ability,” Britsky said. “I am excited about how versatile Kayla is and I believe she is just tapping into her potential at this point.”

Guard Brianna Perry comes to Georgia Southwestern State from Moberly Area Community College in Missouri. While at MACC, Perry scored a career-high 36 points against Jefferson Community College. Perry became the fourth player in MACC history to score at least 500 points in her career. She led MACC in scoring as a freshman, averaging 10 points per game on a team that went 23-8 and appeared in the NJCAA Top 25 poll. MACC was ranked as high as #4 in the nation and made it to the NJCAA National Tournament.

“Brianna is long and athletic. We will be looking for some veteran play from Bri this year,” Coach Britsky said. “She knows how to win and is a very consistent player. She can shoot the three, put the ball on the floor, and can be a force to deal with defensively. We are looking forward to all that Brianna will bring to the team.”

Morgan Towells is a guard who comes to GSW from Jacksonville State University, an NCAA Division I program out of the Ohio Valley Conference (OVC). While at JSU, Towells averaged 4.2 points a game and 14 minutes per game in the 29 games that she played in. Before she went to JSU, Towells played at IMG Academy in Bradenton, FL, where she averaged 12.5 points per game, 3.5 assists per game and 2.5 rebounds per game. Towells attended the 2016 Maya Moore Girls Elite Skills Academy and was rated a three-star prospect by ESPN. Towells was also invited to the USA Basketball Women’s U16 National Team trials in 2013.

“Morgan is an athletic guard who is skilled enough to play the point, but can also score the ball from the wing with her ability to create one-on-one,” Coach Britsky said. “She has a scorer’s mentality and a competitive spirit. I look forward to working with Morgan this year. She has the potential to make a splash in the Peach Belt this season.”

With these three players coming into the GSW program, coupled with the talented in-coming freshman, the Lady Hurricanes should be much improved in 2018-19.