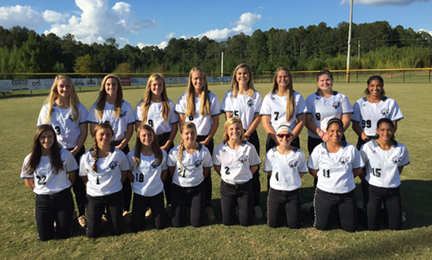 The Lady Wildcats softball team was tied 5-5 with Brookstone in the bottom of the eighth inning before lightning delays forced the game to be postponed. This is the third straight game that Schley County has been unable to finish due to bad weather. Photo by Schley County HS

ELLAVILLE – After having their first two games of the season postponed due to weather, the Schley County Lady Wildcats Softball Team was hoping to get a complete game in with a win over Region 4-A opponent Brookstone on Thursday, August 9, at Schley County High School.

However, after eight innings of play and the teams deadlocked at 5-5, the game was suspended due to another series of lightning delays. Both teams waited the maximum two hours allowed by the GHSA, but the weather would not cooperate and the game was suspended in the bottom of the eighth inning. They will try to finish the game on Tuesday, September 11, at Brookstone, with Schley County hitting in the bottom of the eighth.

Brookstone scored the first run of the game in the top of the first. However, the Lady Wildcats responded with three in the bottom of the third inning. With two outs and nobody on, Alexis Bradshaw singled to left field. This was followed by a bunt single by Carmen Phillips, advancing Bradshaw to third. Nyiah Kelley then executed a bunt single, scoring Bradshaw to tie the game at 1-1. Phillips advanced to third on the play.

Emily Campbell gave Schley County the lead when she doubled to left field, scoring Phillips and advancing Kelley to third. Saige Whaley then grounded into a fielder’s choice, scoring Kelley. Campbell was forced out at third, but the run had scored before the out was made, giving the Lady Wildcats a 3-1 lead.

Schley County added another run in the bottom of the fifth inning. With one out and a runner on first, Phillips singled, advancing Tamia Kelley to third base. Kelley had led off the inning with a walk. Nyiah Kelley then grounded into a fielder’s choice, scoring her sister Tamia and giving Schley County a 4-1 lead.

However, that lead would not last long. Brookstone scored two runs on five hits in the top of the sixth. Schley County responded by scoring a run in their half of the sixth to make it 5-3 in favor of the Lady Wildcats.

However, the Lady Cougars scored two more runs in the top of the seventh to tie the game at 5-5. Schley County had an opportunity to win the game in the bottom of the seventh. Carmen Phillips led off with a single. Nyiah Kelley was then hit by a pitch, but Phillips was thrown out at second trying to steal. Emily Campbell doubled to center field, advancing Kelley to third base. The Wildcats had the winning run at third base with one out. However, both Saige Whaley and her sister, Landry Whaley, struck out to end the threat.

At this point, Hannah Crawford was pitching for Schley County. She was able to keep the Brookstone hitters at bay in the top of the eighth. As the bottom of the eighth was about to begin, that is when the lightning delays began.

This is the third-straight game that Schley County has been unable to get a game in due to weather. The Lady Wildcats will travel to Rochelle, GA for a non-region game at Wilcox County on Saturday, August 11. First pitch, weather permitting, is scheduled for 2 p.m.