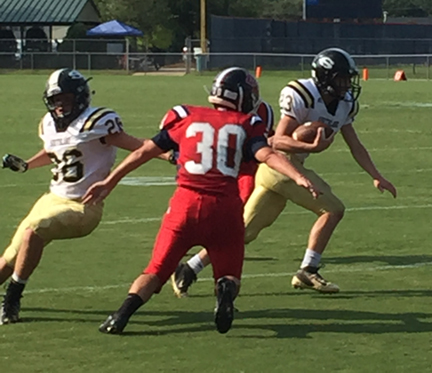 ALBANY – Before the high school football stars of today became stars, they had to develop their skills on the “B Team”, more commonly known as the Junior Varsity. At Southland, it’s called the B Team, and the Southland Raiders B Team lost a hard-fought battle to Deerfield-Windsor 14-8 on Thursday, August 23, at Webb Memorial Stadium.

Southland got on the board first. On third and six from around their own 30-yard line, quarterback Nathan Duke threw a 70-yard pass to Tyler Joyner for a touchdown. The Raiders went for two, and Duke scored the two-point conversion on a quarterback keeper, giving the Raiders an early 8-0 lead. 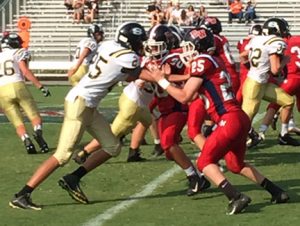 However, the Knights struck back as quarterback Parker Jones led the DW offense down near the Southland 30-yard line. Jones then scampered 30 yards on a quarterback keeper into the end zone for the Knights’ first touchdown. The two-point conversion was no good, but Deerfield-Windsor had cut Southland’s lead to 8-6. 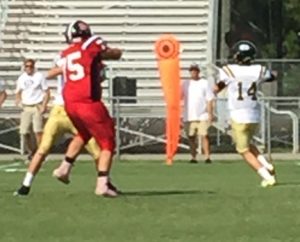 Southland quarterback Nathan Duke is about to throw a 70-yard touchdown pass to wide receiver Tyler Joyner to give the Raiders a 6-0 lead.
Photo by Ken Gustafson

The Raiders were on the move offensively once again, but Duke’s pass went off the hands of a receiver and into the hands of DW defensive back Hunter Owen. However, the Knights turned the ball over when Parker Jones’ pass was intercepted by Caleb Law. Unfortunately, the Raiders weren’t able to mount a drive on offense, and the two teams went into halftime with Southland maintaining an 8-6 lead.’

In the third quarter, the Knights took the lead. Jones threw a 43-yard pass to Smith Glynn, and the Knights had the ball first and goal at the Raiders seven-yard line. On the next play, running back Gleaton Jones scored from seven yards out to give the Knights a 12-8 lead.