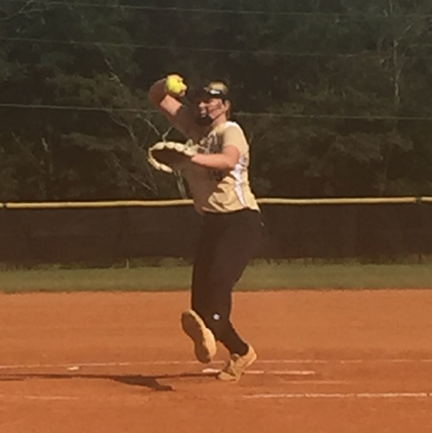 Southland pitcher Rylan Youngdale struck out four batters and walked only one in the Lady Raiders’ 11-6 victory over Terrell Academy. Photo by Ken Gustafson

DAWSON – Southland Academy’s Brookland Weaver went 3-for-3 with a single, two triples, two RBIs and a walk to lead the Lady Raiders to an 11-6 win over the Lady Eagles on Tuesday, August 28, at Terrell Academy.

“We did a great job at the plate. We did much better than we did last week,” Southland Head Coach Rusty Tondee said. “We hit the ball well today. We made the plays when we had to make them. Our girls showed a lot of heart and a lot of guts. I’m really proud of the way they played today. Anytime you can win, it’s a good win. We had the lightning delay, so to come back and be able to play that well after a 30-minute lightning delay was really impressive.

The Lady Raiders jumped out to a 3-0 lead in the top of the first. With one out, Holly McCain singled, then stole second base. Then Brookland Weaver singled, scoring McCain. Reese Rowland was then hit by a pitch, followed by a single by Katie Rogers. Morgan Minick then executed a bunt single. This sequence of events scored two more runs for the Lady Raiders.

However, Terrell Academy struck back in their half of the first. With one out, third baseman Laiken Daniel was hit by a pitch from Southland starting pitcher Rylan Youngdale. Sierra Brogdan then tripled, driving in Daniel for Terrell Academy’s first run. Bailey Harvey then singled to drive in Brogdan. Two more runners reached base, but Youngdale was able to pitch her way out of the inning without further damage.

With two outs in the top of the second inning, Southland was able to score two more runs. McCain hit a double, followed by an RBI double by Sara Beth Storey. Storey was driven in on a triple by Weaver. At that point, Southland led 5-2. 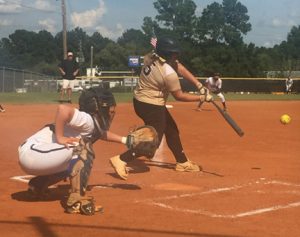 Southland’s Sara Beth Storey at the plate. Storey doubled twice and drove in a run in the Lady Raiders’ 11-6 win over Terrell Academy.
Photo by Ken Gustafson

With one out in the bottom of the second, Terrell Academy’s Maggie Stimpson hit a triple. She was driven in on a single by Gala Price. Price was caught trying to steal second base, and Youngdale was able to get Laiken Daniel to ground into a fielder’s choice to end the Lady Eagles’ threat.

The Lady Raiders went in order in the top of the third against Terrell Academy starting pitcher Sierra Brogdan. Katie Rogers flew out. Morgan Minick popped out and Abby Lightner grounded out to end the threat.

The Lady Eagles scored a run in their half of the third inning. Brogdan led off the inning with a double. Bailey Harvey then moved Brogdan to third on a sacrifice bunt. Emma Jackson then singled to drive in Brogdan. However, Youngdale was able to get the next two batters to end the inning, but Southland’s lead had been cut to 5-4.

In the top of the fourth inning, Ansley Weldon came in to hit for Carson Clements. Weldon singled to lead off the inning and stole second base. However, the Lady Raiders weren’t able to generate any runs in their half of the fourth.

Rylan Youngdale was able to keep the Terrell Academy hitters at bay in the bottom of the fourth inning.

In the top of the fifth, Southland struck for four runs. Sara Beth Storey led off the inning with a double, followed by an RBI triple by Weaver. Reese Rowland then drove in another run on a single, and Katie Rogers doubled, driving in another RBI. Rogers then scored on a passed ball.

The Lady Eagles responded in their half of the fifth inning. Brogdan led off the frame with a double, followed by a single by Harvey. Both Brogdan and Harvey stole third and second base respectively. Brogdan then scored on a passed ball. After Emma Jackson drew a walk, Youngdale was able to strike out Briley Soles. The next batter, Jenn Todd, was called out because when she hit the ball, the ball hit her. Youngdale was able to get the last batter out to end the inning.

Southland added another run in the top of the sixth. Alli Dent led off with a walk, followed by an RBI double by Holly McCain. At that point of the game, lightning was spotted and the umpires delayed the game for 30 minutes. Once it was safe to play, the game resumed.

Youngdale kept the Terrell Academy bats quiet in the bottom of the sixth. The Lady Raiders were able to score a run in the top of the seventh to make the score 11-6 Southland. 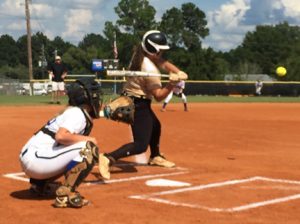 Southland third baseman Alli Dent at the plate trying to make contact with the ball. Dent caught the last out of the game when Terrell Academy’s Jenn Todd lined out to her at third base.
Photo by Ken Gustafson

It was Terrell Academy’s last chance in the bottom of the seventh. Brogdan led off with a single, followed by a fielders’ choice by Harvey, moving Brogdan to second. Youngdale struck out Emma Jackson for the second out. Then Jenn Todd lined out to Alli Dent to end the game.

In addition to Weaver, Katie Rogers also had a good day at the plate. She went 2-for-3 with a single, an RBI double and a walk.

Rylan Youngdale had a solid day in the circle for the Lady Raiders. She gave up six runs on 10 hits. However, she was able to pitch out of difficult situations on at least two occasions. She only walked one batter and struck out four. “In the beginning, we were making a few fundamental errors,” Youngdale said. “We all knew that we could have done better. I wasn’t pitching the best that I could be early on. This was, all around, not normal for us. Around the fourth or fifth inning, we started coming back. I was pitching better and we were making plays in the field. We got into the lightning delay in the sixth inning. After that, we all came back and we just wanted to go home. We were ready to beat down on them again. We just tried our best to get three up, three down every time and end the game.”

For Terrell Academy, they were led offensively by Sierra Brogdan. Brogdan went 4-for-4 with a triple, two doubles, a single and an RBI.

The Lady Raiders will hit the diamond on Thursday, August 30, when they travel to Perry, GA for a tough game against the defending GISA Class AAA State Champions: the Westfield Lady Hornets. First pitch is scheduled for 6 p.m.