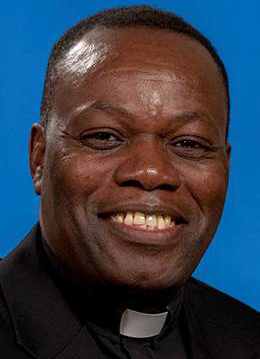 AMERICUS — On July 1, St. Mary Catholic Church parishioners welcomed their new pastor, Father Samuel Aniekwe, a native of Nigeria. As a young child, he experienced the tragedies of the Nigerian civil war which occurred from 1967 until 1970. Ordained in Nigeria in 1996, he served in priestly roles in his native country until July of 2004, when he migrated to the United States.
He initially resided in Pittsburgh, Pennsylvania. He studied and received his master’s degree in healthcare ethics from Duquesne University. While studying he served as a priest at St. Maurice Catholic Church. He was also an on-call hospital chaplain at the University Teaching Hospital. After completing this degree, he moved to Georgia. He served the country as a mobilized active duty chaplain in the Army from 2010 until 2012 at Fort Gordon. Following this service, he commenced and completed studies toward a doctorate in pastoral community counseling education. He received his doctorate in 2014.
In his priestly role, he has served the people of God of Georgia in several assignments. He was parochial administrator at St. Boniface in Springfield from 2012 to 2014. He was transferred to St. Michael’s in Montezuma where he was parochial administrator until 2017. Immediately preceding his transfer to St. Mary in Americus, he was an associate pastor at St. James the Less parish in Savannah.
“Father Sam” is a family-oriented person who enjoys good home cooking. He is jovial and likes being with people of all faiths and backgrounds. He also enjoys playing lawn tennis. He considers it a great honor to serve in his new community and asks for everyone’s prayerful support.