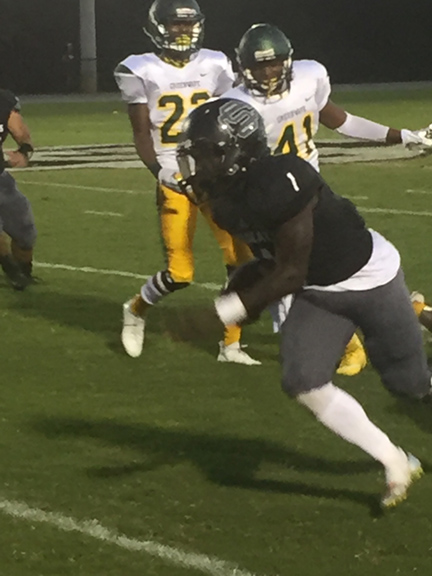 ELLAVILLE – Having had last week off, the Wildcats of Schley County looked fresh and ready to perform. It showed on the field in the second half as the Wildcats came from 10-points down to defeat Spencer (0-4) 21-17 on Friday, September 5, at Schley County High School.

It came down to 4th-and-5 at the Spencer 16-yard line. Running back Tra Sampson ran the ball for the necessary yardage. Then on 2nd and goal, Sampson scored with 38.9 seconds left to give the Wildcats the lead and the win.

“We were sloppy in the first half. We fumbled the football. We gained about 230 yards of offense, but only had seven points at halftime,” Schley County Head coach Darren Alford said. “We made adjustments at halftime. Our defense played great in the second half. That inspired our offense. I’m really proud of these kids.”

After the game, Alford told his team: “I’ve got two words for you: Weight Room. You guys beat them up tonight,” Alford said. “We challenged you and you accepted the challenge. This is not about one individual. This is about the team. We are a family.” 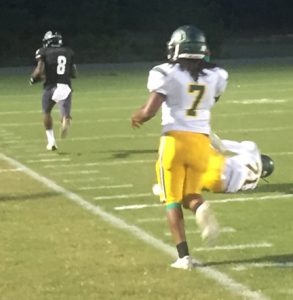 Schley County had chances to score early in the first quarter. They moved the ball all the way down inside the Spencer 10-yard line. Schley County running back Tra Sampson would later score, but the touchdown was called back due to a holding penalty. The Wildcats had to settle for a field goal attempt. However, William Blackwell’s attempt was no good, and the score remained 0-0.

The Wildcat defense held Spencer on their next possession, forcing the Green Waves to punt. The Wildcat offense once again moved the ball down inside the Spencer 10-yard line. However, running back Jakim Hart fumbled the ball. The ball was recovered by Spencer’s Robert Murray, who ran it back 95 yards the other way for a touchdown. The extra point was good, and the Green waves led 7-0. Twice in the first half, Schley County had the ball inside the Spencer 10-yard line, but came away with no points.

The Wildcats, however, would not quit. Quarterback Garett Peavy led the offense on another drive into Spencer territory. Then the ball was given to running back Zamon Ross, who ran the ball 68 yards for the Wildcats’ first touchdown. The extra point was good, tying the score at 7-7. 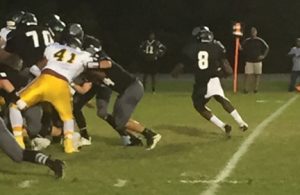 Spencer held the Wildcats on offense and got the ball back. They moved the ball down into Schley County territory. The Wildcat defense forced the Green Waves into a 4th-and 16 situation. However, Sellars threw a pass over the middle to Corey Calhoun, who ran it in for a touchdown. The extra point by Reyes was good, and Spencer led 17-7. In the closing minute of the half, Schley County was able to move the ball down inside the Spencer 10-yard line. However, they were not able to score before time ran out. Spencer led at halftime 17-7. 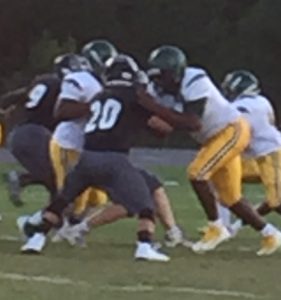 During the early part of the third quarter, Spencer had the ball around midfield. Sellars attempted to throw a long pass, but it was intercepted by Rodney Hicks near the Schley County 26-yard line. Hicks would later recover a fumble for Schley County. From there, Peavy and the offense moved the ball down into Spencer territory. However, on 3rd-and-9, Peavy’s pass was intercepted by Jacoby Smith. Smith ran the ball back into Schley County territory. However, the Wildcat defense rose up again. Sellars tried a long pass towards the end zone, but it was knocked away by Tra Sampson, forcing Spencer into a 4th-and 12. The Green waves went for it on 4th-and-12 from the Schley County 40. Sellars’ pass was incomplete and the ball was turned over on downs. Later in the second half, Spencer had the ball inside their own territory. Jaylen Sellars pass was intercepted and run back for a touchdown by Zamon Ross. The extra point was good, and the Wildcats were within three, trailing 17-14.

Schley County stopped Spencer’s offense and got the ball back. With 3:25 to go in the game, Garrett Peavy threw a long, incomplete pass to Jamyron Clayton, but pass interference was called against the Spencer defensive back on the play. The Wildcats had the ball with 3rd-and-4 at the Spencer 29. Sampson got two yards on the next play, which set up a 4th-and-two situation for the Wildcats. However, off sides was called against Spencer, giving Schley County an automatic first down. This proved to be a huge penalty against the Green waves. The Wildcats ran the ball inside the 10-yard line. It came down to a 4th-and-5 play at the 16. Sampson got the necessary yardage. Schley County ran the clock down to just below 40 seconds. On 2nd-and goal, Sampson scored with 38.9 seconds. The extra point by Blackwell was good, and Schley County led 21-17.

The Wildcat defense was able to stop Spencer’s offense during the remaining seconds to secure the victory.

Schley County improves to 2-1 and will host region opponent Hawkinsville next Friday, September 14, at 7:30 p.m.